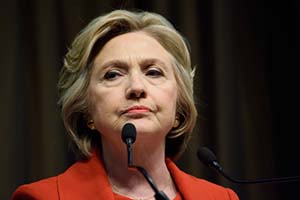 Voter fraud in the United States in 2016 seems like it shouldn't even be possible, but a series of troubling incidents in the Democratic primaries have some pointing fingers at Hillary Clinton.

Starting in the Iowa caucuses and straight through the contests in West Virginia and Nebraska earlier this month, critics have noted multiple election abnormalities that almost always favor the Democratic front-runner.

And the criticism is not only coming from disgruntled supporters of Sen. Bernie Sanders (although they're plenty angry). Numerous voices on the left suspect election fraud on the part of the Hillary Clinton campaign.

Take Iowa, for example, which Clinton won by a razor-thin margin of 0.3%. 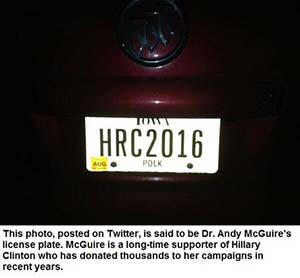 "Too many questions have been raised. Too many accounts have arisen of inconsistent counts, untrained and overwhelmed volunteers, confused voters, cramped precinct locations, a lack of voter registration forms and other problems," noted the Des Moines Register in an editorial.

In several cases, the number of votes at a caucus exceeded the number of people registered. And the "extra" votes favored Clinton.

And yet the chairwoman of the Iowa Democratic party, Dr. Andy McGuire, refused to re-check the results. McGuire's vanity license plate reads: "HRC2016."

But this is much bigger than Iowa...

One persistent problem CounterPunch found was discrepancies between exit polls and final results.

Unlike the many polls taken in the months leading up to election, exit polls are conducted on the day of the election at carefully chosen polling stations. Great care is taken by the pollster (Edison Research, which supplies the data to most major news organizations) to weight the results for accuracy.

So exit polls tend to be much more accurate than pre-election polls.

In the Republican primaries, CounterPunch found that the exit polls were very good at predicting the actual results, falling within the margin of error 24 out of 25 times. And the slight deviations favored no GOP candidate in particular.

Not so on the Democratic side. Here the results were outside of the margin of error (3.5%) in 17 out of the 25 contests. And in 16 of those, the miss was in Hillary Clinton's favor. By in her favor I mean that her actual results were higher than what the exit poll indicated.

It gets crazier. In nine contests, the exit polls underestimated Clinton's numbers by 7% or more - which should be almost impossible.

The most likely explanation is some sort of Hillary Clinton voter fraud. It's not that far-fetched.

You see, many of the voting machines used throughout the United States, particularly older ones, are easily hacked. And in most cases, such tinkering leaves no traces.

"Hundreds of jurisdictions throughout the United States are using voting machines or vote tabulators that have flunked security tests," notes CounterPunch.

Of the states where the exit polls underestimated Clinton's results by 7% or more, two-thirds used voting machines 10 years old or more - the most vulnerable to hacking.

There's no hard proof, but if the causes behind these issues were random -- be they with the exit polls or faulty voting machines -- why do they invariably favor Clinton?

And there's still more evidence of possible Hillary Clinton election fraud. These allegations are the most disturbing of all...

Did Clinton Supporters Suppress the Vote in New York and Arizona?

In at least two primaries, New York and Arizona, thousands of registered Democrats in districts that favored Bernie Sanders were prevented from voting.

In New York, 125,000 Democrats were purged from the voter rolls, supposedly as part of routine maintenance to remove those who had moved away or failed to vote in previous elections.

But many who tried to vote were turned away at their polling place. In some cases, their party registration had been changed from Democrat to Independent or Republican, preventing them from voting in New York's closed primary.

In a closed primary, you can only vote if you're registered as a member of that political party.

Such party affiliation switches occurred in several other closed primaries as well, including California, Connecticut, Pennsylvania, and Maryland. And once again, the victims were disproportionately Bernie Sanders supporters.

Arizona's issues were even more suspicious. Maricopa County, which includes the city of Phoenix and most of the state's Democratic voters, had just 60 polling places to serve 800,000 registered voters.

Long lines resulted in many voters never getting to the polls. Turnout was a third of that for the 2008 primary. Plus, Arizona also suffered from changed voter registrations.

The resulting low turnout was a boon for Hillary Clinton, thanks to early voting.

Afterward, a Hillary Clinton representative in Arizona blamed the voting issues on "a Republican effort to make it harder for people to vote."

There have been other incidents, including a controversial Nevada Democratic Convention that resulted in Clinton gaining seven out of 12 contested delegates, even though Sanders had won a majority of the state's county conventions.

We may never know for sure if the Hillary Clinton campaign orchestrated large-scale election fraud, or whether she just happened to luck out every time there was an aberration in the system.

But for a candidate deemed untrustworthy by 57% of American voters, so many incidents looks awfully suspicious.

Trouble for Trump's Wall: We all know the promise by now: Donald Trump will build a wall on America's southern border and force Mexico to pay for it. Specifically, Trump has said he'd threaten to impound the payments that immigrants send back home to their families to twist the arm of the Mexican government into forking over the billions to pay for the wall. But Trump missed a key loophole. Even a President Trump would be powerless to prevent this...

Election fraud is your subject, not voter fraud.

Please don't help the GOP push voting restrictions by unwittingly helping them create the impression that there is "voter fraud" out there – there is NONE.

Election fraud. Please be smart enough on a topic to write about it before beginning. Otherwise, you have a good piece…..completely ruined by ignorance of the correct term.

you are right, but Jeeze, eaze up! Here is a REAL journalist, telling the truth! We should be carrying him around on our shoulders and buying him a beer. That said, yes Mr. Zeiler should edit this to use the terminology that reflects what his intent is. Election Fraud.

thank you for for shining a light and informing your readers, we are at a crucial moment in our history, when the power of the american people are working to help shine a light on so many counts of fraud by the democrat party, or perhaps it may pass as the un-democratic and shameful party. The party doesn't even see that it has become so diseased it is literally dying, in the business of alienating life long democrats that have become disgusted by the exposed corruption.
for those hillbots out there claiming this is not "your" subject matter, well the nickname is due to lack of free thinking and reason, but the point is we are all connected, as are all the issues that they choose to ignore, and these issues are all connected to us, our future, our planet, our humanity and very much our economy, all of it would come to an agonizing death. The wealthiest few in our country are investing in "armageddon", while the new movement of awakening is choosing to save us all and gear towards a tolerable and livable planet.