The Wal-Mart stock price has fallen 4.5% in the five days leading up to its Q1 earnings report tomorrow (Thursday) before the open.

Before we get into our view on Wal-Mart Stores Inc. (NYSE: WMT) stock, here's what analysts expect from the retailer's fiscal 2017 Q1 results. 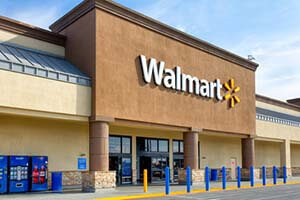 While consensus forecasts call for a slip in earnings and revenue, analysts are divided on same-store sales figures.

MKM Partners also believes Wal-Mart will report just a slight increase in same-store sales. They also forecast a "significant" decline in earnings for the full year. Like Jefferies, MKM is worried about Wal-Mart's high exposure in grocery, which contributes about 56% of the company's total U.S. sales.

In February, Wal-Mart cut its FY2017 growth outlook from 3% to 4%. The change reflects the impact from recently announced store closures and continued strength in the dollar.

Before buying Wal-Mart stock in 2016, here's what all investors need to know right now…

Wal-Mart has been sharpening its focus on e-commerce. In October 2015, the retailing giant announced it would invest $2 billion in the online space over the next year.

But the ambitious plans haven't paid off so far. Now, investors are growing impatient and skeptical.

The WMT stock price plunged more than 12% in October on news of the e-commerce push. The drop was the sharpest decline for WMT stock in 25 years, wiping out $21.5 billion of WMT's market cap in a single day.

E-commerce giant Amazon.com Inc. (Nasdaq: AMZN) continues to take market share from Wal-Mart in all categories. Amazon is now the second-biggest online retailer of apparel, quickly catching up to Wal-Mart, which sits at the top spot. According to Cowen & Co., Amazon is on pace to become the No. 1 U.S. apparel retailer next year, knocking Macy's Inc. (NYSE: M) off its perch.

The investment bank said Amazon's success in the apparel category is being driven by a dramatically larger selection, improved brand relationships, superior fulfillment, and technology innovations. Amazon is growing in the clothing business, while traditional retailers such as Wal-Mart and Target Corp. (NYSE: TGT) are in a decline.

Target's results were the latest in a string of dismal earning reports from the retail sector. That doesn't bode well for the Wal-Mart stock price.

Tight-fisted consumers, weak earnings, and an uninspiring outlook are reasons why we've been advising investors for months to avoid Wal-Mart stock. The e-commerce issues bolster our stance.