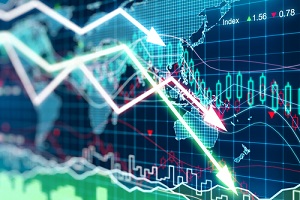 Today, the S&P 500 slumped to its lowest level since March, while the market's fear gage, the CBOE Volatility Index (VIX), ticked back above 16 after increasing 4.2%.

Yesterday, the U.S. Federal Reserve bank released the April FOMC meeting minutes, and many officials made the argument in favor of a June interest rate hike. According to CME FedWatch, a tool that measures the probability of a rate hike, there is a 30% probability of a hike next month. But that is significantly higher than the probability prior to the minutes' release.

Gold prices and silver prices were sliding 1.5% and 3.6%, respectively, as the stronger dollar weakened investor sentiment. With so many mixed opinions on what the Federal Reserve is planning on doing in the weeks ahead, investors are wondering if they should purchase silver after Thursday's price slide and ahead of the rate decision. Find that answer and insight from Money Morning Resource Specialist Peter Krauth, right here.

The number of Americans seeking unemployment benefits slipped from a 14-month high last week, boosting optimism about a possible economic recovery in the second quarter. Traders viewed today's jobless claims report as another reason why the Fed could consider a hike in interest rates during the June 14-15 FOMC meeting.

On the deal front, shares of Monsanto Co. (NYSE: MON) were up 4% on news that German chemical giant Bayer AG (OTCMKTS ADR: BAYRY) has offered an unsolicited takeover bid for the international seed giant. The deal would create the world's largest agricultural supplier and easily surpass the $42 billion deal received by Syngenta AG (NYSE ADR: SYT) earlier this year.

Earlier this week, Goldman Sachs Group Inc. (NYSE: GS) reversed its bearish stance on oil prices, saying that it believed that the price of crude would tick north and that the global supply glut was over. Typically, you should ignore Goldman's insight, since they are rarely objective and usually report timely information. Our Global Energy Strategist Dr. Kent Moors says that you shouldn't trust Goldman, especially on oil prices. Here's why.

But the big news today was the bizarre tale that seems like it could only come from a Hollywood script. PGA professional Phil Mickelson is under investigation from the U.S. Securities Exchange Commission for his involvement in a $40 million insider trading scheme. According to the agency, the professional golfer earned roughly $931,000 after receiving an insider tip on the quarterly performance of Dean Foods (NYSE: DF) and a related company spin-off. The story grows odd when one discovers that Mickelson received the tip from a professional gambler – to whom the golfer owed money. In addition, the gambler allegedly received his inside information from none other than the former Dean Foods Chairman Thomas Davis. Mickelson chose to not go the Martha Stewart route and settled the case for roughly $1 million and interest.