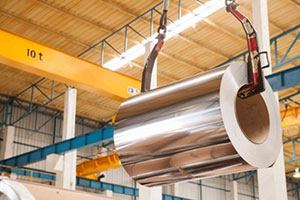 China decried a decision by the U.S. Chamber of Commerce yesterday to impose steep duties on the country's cold-rolled flat steel, which is primarily used for car manufacturing.

You see, the American steel industry is in the midst of what could be its greatest import crisis in history…

About 12,000 steel workers have lost their jobs in the past year. U.S. mills are averaging only 70% of capacity utilization, all because of a record onslaught of cheap foreign imports — primarily from China.

The U.S. Commerce Department is accusing Beijing of distorting the global market by dumping its excess supply abroad. You see, the Red Dragon's steel sector, which exported a record 112.4 million tons last year, is currently suffering from overcapacity due to slowing domestic demand.

Chinese authorities stated they were "strongly dissatisfied" with the move. It claims that overcapacity is a global problem brought on by weaker demand. As proof, Chinese officials cited the fact that Beijing has also announced 500,000 job cuts in its own steel mills.

The global steel glut will be addressed later this month by the Group of Seven rich nations, which consist of: the United States, Canada, France, Germany, Italy, Japan, and the United Kingdom. The gathering will likely add pressure on China to alter its unfair subsidizing practices, particularly with steel.

However, should the United States up its "trade war" game and halt trading with Chinese steel producers altogether, it would have little effect on the massive country, reported Reuters today. The U.S. accounts for only 2% of its total shipments.

China's Secret Bank: China's going for gold this summer. Literally. The country's state-owned ICBC Standard Bank just purchased a massive gold vault in London. And no one knows where the secret vault is located. Except for the Chinese, of course…

World trade is about competitive advantages. May the best industries win, remember? Nobody complains about American movie and entertainment industries dominate the world with Mickey Mouse laws (Copyrights extended to 95 years!!).

For steel, the Chinese chose to invest intelligently. Their newer plants are at least two generations more modern. They use less energy, use less labor, and are highly efficient. The end result is that the production costs at the newer mills are at least 30% lower than the rest of the world (even including efficient S. Korean mills). The competitive advantage becomes more marked as the older, less efficient mills are phased out.

America, if it chooses to, can certainly spend the money and build even better mills. But apparently there are better places to invest than steel. As always, may the best mills win – ultimately consumers win.