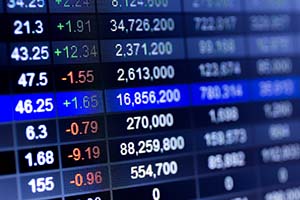 Dow Jones Industrial Average News, 5/20/16 – The economy looks like it is climbing out of the doldrums of a weak first quarter. This morning, the New York Federal Reserve said that GDP is expected to register an annualized rate of 1.7% in the second quarter. That's 0.5% higher than the NY Fed's previous estimate last week. The economy has seen gains from the manufacturing sector and the housing industry. The Dow added 40 points as trader sentiment improved thanks to the stronger economic outlook.

Shares of Deere & Co. (NYSE: DE) fell more than 5.2% after the company reported falling sales and profits in the wake of a decline in agricultural commodity prices. The heavy machine manufacturer said that the global agriculture sector has slowed down; however, the firm said that its focus on cost containment helped it overcome low expectations for the quarter.

Meanwhile, financial stocks rallied again as expectations for a summer rate hike take shape. New York Fed President William Dudley said yesterday that improving economic data justifies a rate increase in June or July. It's the latest signal that the markets are still overly reliant on the words and actions of the U.S. Federal Reserve, which holds its next policy meeting on June 14-15.

The National Association of Realtors announced the April report for existing U.S. home sales, and investors liked what they heard. Existing sales increased in April by 1.7%, the latest sign of positive momentum in the industry. The news helped push up shares of housing stocks this afternoon. Shares of KB Home (NYSE: KBH) pushed up 1.6%, while Toll Brothers Inc. (NYSE: TOL) added more than 2.4%.

Crude oil prices slipped as supply concerns fell in focus on Friday. Concerns about Nigeria's production level weighed on investor sentiment. WTI crude prices slipped 0.8%, while Brent crude dipped 0.1%. Oil prices were up 4% on the week and have been hovering right around $50 per barrel as global supply disruptions continue to plague oil-producing nations like Nigeria, Canada, and Venezuela.

But the big news today were the rumors surrounding Yahoo! Inc. (Nasdaq: YHOO). The Wall Street Journal reports that Verizon Communications Inc. (NYSE: VZ) and several other suitors are planning a $2 billion to $3 billion offer for the core Internet business of technology giant. That offer, however, is far lower than Wall Street had anticipated, driving down YHOO stock and offering a blow to activist hedge fund manager Jeffrey Smith at Starboard Value. Shares of YHOO stock were off more than 5% this morning.