It looks like the awaited correction in gold prices could finally be here, courtesy of the U.S. Federal Reserve.

On Wednesday, May 18, the April FOMC meeting minutes were released. That was the impetus for the 1.1% decline in the price of gold so far this week.

The minutes revealed some FOMC members were favorable towards an April rate hike. Most members also felt a June rate hike was appropriate if economic data signaled improvement in the second quarter.

Does that mean the gold price rally is over? Or is the dip just a temporary result of the rate hike chatter?

Let's look at the gold price action this past week, and then I'll forecast where gold prices could be headed in the near term…

The Volatility in Gold Prices This Week

The price of gold kicked the week off on a relatively flat note. On Monday, May 16, prices rose in early morning trading but couldn't hold those gains throughout the day. Gold prices ended up closing at $1,274.20 for a slight 0.1% gain. Gold ticked up again the next day, jumping 0.4% to settle at $1,279.

But volatility kicked in on Wednesday, May 18. After weakening overnight, the gold price plunged by nearly $20 immediately after the release of the Fed minutes. It leveled off by late afternoon and closed down 1.6% to $1,258. 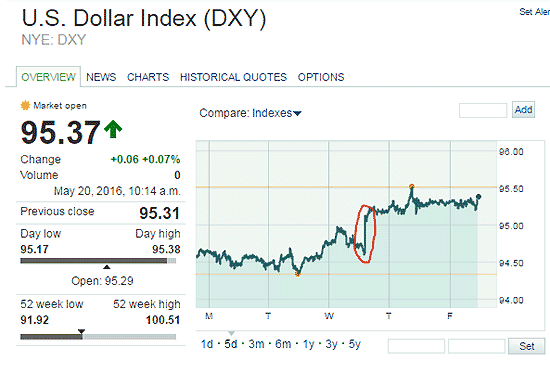 For comparison, here's how the U.S. Dollar Index trended this past week.

Notice the dollar's surge around 2 p.m. on Wednesday from about 94.55 to 95.10. Of course, that reaction came in the wake of the FOMC minutes, which put the possibility of a June rate hike clearly on the table.

Although the price of gold is up today, volatility may continue in the short term.

Right now, it's important for investors to keep an eye on this specific price level.

Gold fell a long way from its $1,287 peak on Monday, which has many traders convinced the gold price is correcting.

As I pointed out, the FOMC minutes, which showed support for an April rate hike and even more for June, boosted the dollar. The rise in the DXY naturally weighed on the gold price.

I've also been telling you for weeks about the likely correction or consolidation in gold prices. One of the reasons why I saw this coming was the Commitment of Traders (COT) reports. The COT found that smart money – or investments from large commercial hedgers – is near an all-time extreme net short position.

The other was possible exhaustion after the price of gold had a strong rally since late January. Since Jan. 29, prices have surged 12.7%.

Wednesday's action could be the beginning of this correction. However, gold's performance on Thursday first saw follow-through weakness, then a strong reversal. Gold stocks also closed higher from the previous day's close.

At this juncture, I suggest you closely watch the $1,252 price level. That's the 50-day moving average. A close below that will be bearish, and the next target would be the $1,220 level.

The Bottom Line: Thanks to the FOMC minutes and strengthening dollar, gold prices struggled to post gains this past week. These factors – combined with short positions from commercial traders – may cause some more losses over the short term. Right now, it's important to see if the gold price touches $1,252. That will indicate whether or not gold prices have a bearish path ahead of them.

Make Money from Gold Prices No Matter Where They Move: Metals like gold and silver are must-have investments for your portfolio. That's because they serve as "crisis insurance" from volatility in the broader market. But most investors don't know how to trade gold or get their hands on it. Here's your essential guide to investing in gold and silver this year…

Many times I read comments like above. I certainly do not expect an always accurate prediction for the direction of precious metals next week which was in effect the subject of this commentary. But, it,would be a welcome change to see such a prediction rather than other lesser defined and obscure comments about something unrelated. How about it – will gold withstand and increase in value on Monday, or will it drop next week? Please, make me a reader instead of just passing thru for a possible casual glance.

This article is useless. I cannot understand why it was published.

He never mentions the price target promised by the headline. What specific price level are we supposed to keep our eyes on? How will the price target indicate whether gold prices have a bearish or bullish path ahead in 2016?

"I suggest you closely watch the $1,252 price level. That's the 50-day moving average. A close below that will be bearish, and the next target would be the $1,220 level."

Of course, I realize that this was written over a week ago now and hindsight is 20/20 versus "predictions" like this article, but so now what? The author was talking about gold price points of $1,252 and $1,220. However, as of last Friday (May 27), the gold price was down to only $1,212! So, I take it from this article that the author believes that gold will be very bearish then in the short term at least as the dollar is rallying and becoming stronger after the FED talked about interest rate increases? So, what is the path forward for… Read more »