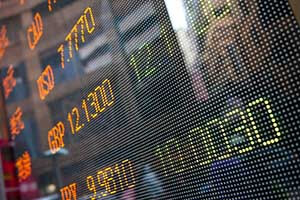 The Dow Jones Industrial Average lost eight points on Monday as investors weighed statements on the timing of the next interest rate hike by the U.S. Federal Reserve. A potential megamerger renewed optimism for deals as companies continue to hunt for market share.

San Francisco Fed President John Williams and St. Louis Fed Chief James Bullard both offered hawkish sentiment during speeches today. Both hinted that the markets can expect more than one interest rate increase in 2016. According to CME FedWatch, markets see a 30% probability of a rate hike in June. The probability increases above 50% in July.

Here's what you need to know about the timing of the next interest rate increase.

Crude oil prices slipped after Iran's key oil ministers said the nation has no plans to freeze crude production ahead of the upcoming OPEC meeting. Iran is trying to hike its production levels back to its output during the pre-sanction years. OPEC producers are set to meet on June 2 to discuss the cartel's global production target. Iran and Saudi Arabia remain deadlocked in proxy wars in hotspots across the Middle East, raising the stakes of next month's meeting.

Biotech stocks are in focus as public health officials warn about a state-side outbreak of the Zika virus. The National Institute of Allergy and Infectious Diseases announced there are already more than 500 American cases of the disease. Warming summer months could lead to an outbreak, raising expectations for a big run for companies aiming to tackle the disease. The disease is also raising concerns about safety in Brazil, where the 2016 Olympics will be held this summer. Companies that have been working on potential cures and treatments include Zika stocks like Inovio Pharmaceuticals Inc. (Nasdaq: INO), Sanofi SA (NYSE ADR: SNY), and Intrexon Corp. (NYSE: XON).

But the big news today was Monsanto Co. (NYSE: MON). Shares of the global agricultural jumped more than 5% on news that German drug and chemical maker Bayer AG has offered $62 billion for the firm. This would be the largest takeover by a German company in the history of the markets. It is also the latest in a string of deals in the agribusiness sector.