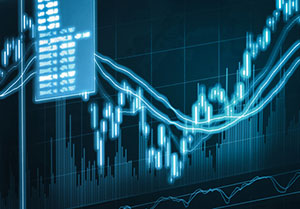 First up, new home sales hit an eight-year high as prices surged in April, offering a boost to the broader economy. The seasonally adjusted annual rate of home sales jumped 16.6% — the fastest pace since 1992. The overall housing market is benefiting from a tight labor market, improving wages, and near record-low mortgage rates.

The rally in new home sales complemented a strong earnings report from construction giant Toll Brothers Inc. (NYSE: TOL). The company announced a more than 30% jump in quarterly revenue thanks to increasing demand. The firm said that it sold a little more than 1,300 homes in the first quarter at an average price of $855,500. TOL stock added nearly 8% on the day.

Crude oil prices pushed closer to $50 per barrel as traders anticipate a drawdown in domestic inventories. The American Petroleum Institute (API) is expected to announce a decline in U.S. crude stocks after the bell, but ahead of tomorrow's official report from the U.S. Energy Information Administration. WTI crude prices gained more than 1.2%.

Brent crude added 0.7% as Iraq's ongoing infrastructure problems fueled a slight downturn in its daily production. Traders are eyeing the ongoing soap opera involving OPEC, as the global oil cartel attempts to build support for a production freeze in order to support crude prices. Iran announced ahead of a key meeting among oil producers that it will not participate in any production freeze, a statement that has raised the stakes in its ongoing rivalry with Saudi Arabia.

Financial stocks rallied again today as sentiment grows for a possible interest rate hike in either June or July. Shares of Bank of America Corp. (NYSE: BAC) and JPMorgan Chase & Co. (NYSE: JPM) both pushed up more than 1.5%. Meanwhile, Citigroup Inc. (NYSE: C) added more than 2% on the day. It was just last week that CME FedWatch projected just a 4% probability of an interest rate hike during the June 14-15 FOMC meeting. Today, that probability has increased to roughly 39%. Investors will keep an eye on a speech from Fed Chair Janet Yellen on Friday.

But the big news today was on the deal front. Shares of Monsanto Co. (NYSE: MON) were up nearly 3% after the firm rejected a $62 billion offer from German drug and chemical maker Bayer AG (OTCMKTS ADR: BAYRY). The global seed manufacturer said that it will seek a higher price and continue negotiations on behalf of shareholders. Analysts expect that such a deal could receive regulatory approval. MON stock added more than 2.7%.