Millions of people are following the waves of demonstrations going on across America right now with feelings that range from disgust to solidarity. But there's another reason to follow them closely.

That's what we're going to talk about today.

To be honest, most people don't think of civil unrest this way because they get too wrapped up in the issues at hand and, not surprisingly, their emotions get the better of them. Get those out of the way though, and a very different and potentially very profitable picture emerges.

My goal is to teach you how to tell the difference between simple dissent and potentially profitable anger.

Not if you know what to look for.

How to Tell Leaderless Rabble-Rousing from an Actionable Opportunity 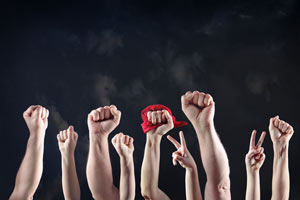 …I thought I'd ride my electric scooter so I'm the least hypocritical person here.

Jim and I had come to Anacortes to check out protests against the Shell and Tesoro refineries here being held by Break Free Pacific Northwest, an environmental activism organization that wants to end America's dependency on oil and support renewable energy.

Sadly, what we saw proved his point.

I know I'm going to ruffle some feathers today, so let me state for the record before I getting rolling that I am not suggesting the protestors are wrong in this case. In fact, I agree that we need to move full speed to renewables and alternatives.

Anxious to assign blame for global warming and a whole host of other environmental woes, an estimated 2,000 protestors came here to set up camp and make their voices heard…

…in their gasoline-burning vehicles

…prepared to float to the terminal in plastic kayaks

…sleeping in their tents made from chemically manipulated textiles

…drinking from their Nalgene bottles

…all while networking on their smartphones and portable computers

My quick back of the envelope calculations suggest that the protesters spent $240,000 in fuel to get here and back, $560,000 in gasoline equivalents to make the cars they used for transportation, and $27,400 in petroleum products to make their kayaks. And that's figuring only 800 cars – assuming the activists carpooled.

Further, the city spent an estimated $60,000 in extra budget for law enforcement, medical, and safety personnel and the county money on top of that – all of which negatively impacted already tight budgets planned for the elderly, the homeless, and children in the area. Among other things.

Never mind that the kayaks leech a stew of toxic chemicals called polycyclic aromatic hydrocarbons into the seafood-rich waters around Anacortes. Or that protest actions disturbed some of the most fertile Blue Heron grounds in the country during prime nesting season.

The worst part, though, came afterwards… the city had to clean up more than 2,300 pounds of trash left behind when the merry menagerie pulled out of town. That's hardly consistent with the public image of environmental sensitivity.

And you know what? Both the Shell and Tesoro refineries they targeted got right back to business Monday morning not having missed a drop of production. The trains they claimed to have blocked by chaining themselves to the tracks for 72 hours weren't scheduled anyway.

Gathering 2,000 people outside a refinery may ignite a passionate few who will replay the scant sound bites and news footage countless times as affirmation of their "victory," but it is extremely unlikely to prompt action, let alone result in a profitable opportunity because investors expect this kind of thing, especially when it comes to energy.

Occupy New York made headlines worldwide but failed for the same reasons. It's worth noting that Wall Street securities firms – the subject of the protests – made $83 billion in profits during the first two-and-a-half years of Obama's presidency compared to $77 billion over the eight years George Bush was in office.

To really make an impact, these same 2,000 people should have gone to Washington with a seriousness of purpose and done something totally unexpected… on foot or at least in well-tuned, environmentally sensitive vehicles instead of the Mad Max like fleets of ancient Subarus and Suburbans stereotypically associated with the environmentalists.

The Unexpected Is Profitable Every Time

Protests that do the unexpected are what you want to focus on. They're the ones that matter because it's the unexpected that makes stock prices move.

Good or bad, it really doesn't matter; if "it" catches traders by surprise, prices move.

Target Corp. (NYSE: TGT), for example, is under tremendous pressure over its recently announced transgender bathroom policy. More than 1.2 million people have reportedly signed a petition to boycott the store and the number is rising as the anger builds. At $65 a person, that's a potential $78 million revenue hit that will go straight to the bottom line of the next few quarters.

Management, of course, denies that there's an impact. CEO Brian Cornell noted during his most recent media call that the company has been tracking data carefully and has not "seen a material nor measureable impact on [its] business."

I disagree, and said as much back in early May during an appearance on FOX Business Network as the brouhaha gathered strength.

Target stock has dropped $13 since mid-April to a close of $67.05 last Thursday, which means the company has taken a $7 billion haircut in terms of capitalization.

Nike Inc. (NYSE: NKE), too, thought it was above the fray under similar circumstances, but that stock got hammered when activists waged a campaign accusing the company of exploiting child labor.

Other companies are at risk when you think about it, including, for example, Monsanto Co. (NYSE: MON), Halliburton Co. (NYSE: HAL), and Volkswagen AG (OTCMKTS: VLKAY), just to name a few. That's not insignificant.

A 2006 BYU study of protest coverage in The New York Times found that stock prices drop an average of 1/10 of 1% for every paragraph printed. Similarly, a Cornell University study covering 28 years of protests found that they caused a drop of 0.4% to 1%, with most of the drop happening the day of the protest and the day immediately following the protest.

Like many things the digital age has changed, those numbers may be double or even triple that today thanks to social media, the Internet, and the relentless 24-hour news cycle.

So the next time you see dissent brewing, don't just throw up your hands or rush out to join the fracas, if you're so inclined. Think about what the movement really represents and which direction the money's going to flow as a result.

Here's a four-part checklist that can help you sort out the money from the madness:

Then, make your move.

If you're an investor, wait until the storm blows over and buy at a discount. That way you have both the time and luxury of picking an entry point and a price that matches your individual risk tolerance and investment objectives. Nike, for example, fell more than 25% in the immediate wake of the child labor squabble.

Yet, today the company has a commanding 62% market share of athletic brands in the United States and annual sales of $28 billion. That's not too shabby for a company valued at just $8 billion the year before the scandal broke!

Target, with $4.05 billion cash on hand and a commanding position in the U.S. retail space, will do whatever it takes to repair frayed consumer loyalty, too. I have no doubt it will recover and then some as the "fight" continues.

If you're not confident you can pick the bottom, that's okay. Try using one of our favorite Total Wealth Tactics: dollar-cost averaging to edge your way in. Lowball orders work well here, too.

If you're a trader with the proper skills and risk management, consider shorting any company that activists have targeted. But move quickly when the headlines break and be prepared to exit the trade when executives counter or take steps in the interest of survival.

As long as emotion mixes with ideology, there's plenty of profit potential.

Editor's Note: Total Wealth investors know that riding the Unstoppable Trends will lead to profit opportunities and the chance to outperform the markets by a factor of two, three, or even seven, as the Trends that Keith's uncovered power companies forward in a way that outside forces can't derail. Now, as nature issues a $2.2 trillion ultimatum to the world's seventh-largest economy, Keith's uncovered yet another opportunity. You can get the comprehensive report right here by signing up for Total Wealth. It's free!