The NFLX stock price has rallied 8.54% to a one-month high of $97.26 this week after three Wall Street firms released upbeat reports on Netflix Inc. (Nasdaq: NFLX).

Monday, UBS, RBC Capital Markets, and Piper Jaffray shared an optimistic outlook for the stock price over the next several months. 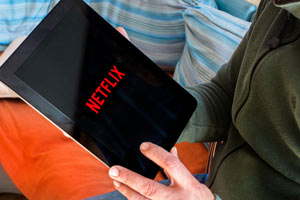 Tuesday, Stifel Nicholas issued a rosy outlook for the NFLX stock price based on the high number of movies and television series in its summer catalogue.

In a company blog post on Monday, Netflix Chief Content Officer Ted Sarandos highlighted a number of third-party and original films set to debut on the company's U.S. service this summer. Most original films will be available globally.

With all four of these Disney studios releasing blockbuster hits on a regular basis, Stifel said the Disney deal could be a game-changer for Netflix's U.S. movie offering. The firm also said several original series set to launch this summer will draw viewers. Stifel has a $143 Netflix stock price target.

Now that we know how some of Wall Street's biggest banks are investing in Netflix stock, here's how we recommend playing NFLX now…

The Best Way to Play the NFLX Stock Price in 2016

JPMorgan Chase has an "Overweight" rating on Netflix and advises clients to buy any weakness in the stock. The NFLX stock price fell 19% from mid-April to early May following solid Q1 earnings, but subscriber growth disappointed.

Morgan Stanley is also bullish on Netflix. The firm expects Netflix will likely see a ramp-up in third-quarter net subscriber additions. Morgan Stanley said the recent pullback in the Netflix stock price was an opportunity for long-term investors.

Money Morning is also bullish on the Netflix stock price with a long-term view.

However, the Netflix stock price is also notoriously volatile. That's why shares are best suited for the long-term investor. It's extremely difficult to time the movements of the stock on a day-to-day basis.

Netflix remains the leader in the streaming-video space, and by a comfortable margin. While competition is increasing, new rivals are not likely to upset Netflix's commanding lead. Talks of an activist push to shake up the company's board could also fuel the Netflix stock price.

The Top 5 IPOs to Watch in 2016: There was an absence of IPO activity toward the end of 2015. But we'd like to see these five companies go public in 2016. And if they do, they'll be the most exciting and promising deals of the year…

Is there anyway to get a text version of the video. I can't have the video playing during lunch time but I can read it on my phone.

If it's one of our long-form videos, clicking on the box to close the window will bring up an box asking whether you want to "leave" or "stay." If you click on "stay" you will be sent to a text-only version.