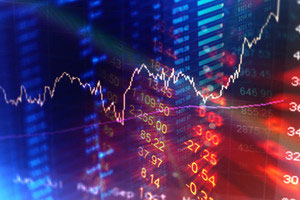 The Dow Jones Industrial Average today (Wednesday) rallied another 170 points thanks in part to a "breakthrough" deal with Greece and its creditors. The deal addresses the beleaguered nation's ongoing debt challenges. But on the downside, retail stocks continue to struggle in the face of tough earnings reports and underwhelming forecasts.

Financial stocks were pushing higher again as investors anticipate that the Federal Reserve will increase interest rates in either June or July. Shares of Bank of America Corp. (NYSE: BAC), JPMorgan Chase & Co. (NYSE: JPM), and Citigroup Inc. (NYSE: C) all increased more than 1.5% on the day. According to CME Group's FedWatch, markets see a 38% probability of a June rate hike and a 45% chance of a boost to short-term rates in July.

It's another bad day for retail stocks. Shares of Tiffany & Co. (NYSE: TIF) recovered from an an intraday decline of as much as 4% after the luxury retail firm reported its worst sales decline in six quarters. Meanwhile, apparel retailer Express Inc. (NYSE: EXPR) cratered another 9% after the firm missed quarterly expectations.

Crude oil prices were pushing toward $50 per barrel as supply concerns abated around the globe. Early in the session, traders took some profits off the table after the Energy Information Administration (EIA) reported that crude stocks in the United States fell by 4.2 million barrels last week. That figure topped analyst expectations but fell short of the figure projected by the American Petroleum Institute. With today's gains, crude oil prices have risen a whopping 84% since February lows.

Brent crude added 2.5%, while WTI prices added another 2.1% as OPEC producers plan to meet next week to discuss a possible production freeze. Today, Qatar's energy and industry minister said that he wants a minimum of "$65 per barrel," a level that is "badly needed at the moment." A potential deal is under pressure after Iran's leaders said they would not participate in a production freeze. So, where do oil prices go from here?

But the big news today was the announcement that the SEC is investigating the accounting practices of Chinese e-commerce giant Alibaba Group Holding Ltd. (NYSE: BABA). The Alibaba stock price fell more than 7.2%, while stakeholder Yahoo! Inc. (Nasdaq: YHOO) slipped nearly 5% on the day.

So, is the BABA stock price drop a long-term concern?