He presented data that indicates the global economy is on a path to repeating the 2008 global financial crisis.

Abe's evidence included a chart that signaled a 55% drop in global commodity prices between June 2014 and January 2016. He compared the similarities of this modern-day commodities crash to the commodities price plummet that occurred between July 2008 and February 2009.

That crash followed the Lehman Brothers bankruptcy. Lehman had been a Wall Street darling and its fourth-largest investment bank when it filed for Chapter 11 protection on Sept. 15, 2008. Its demise triggered a global financial crisis.

A copy of the chart Abe reportedly presented at the closed summit appears to be circulating on Twitter today. However, its authenticity can't be verified: 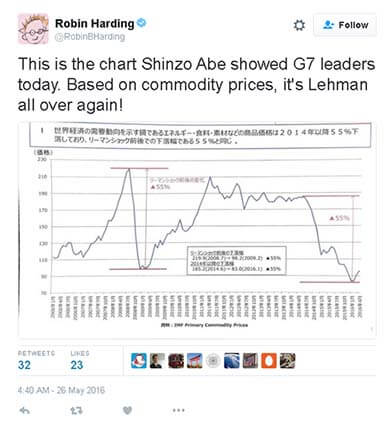 Now, here is a look at the Reuters/Jefferies CRB Index (CRY:IND), which shows our modern commodity price downturn starting from 2014: 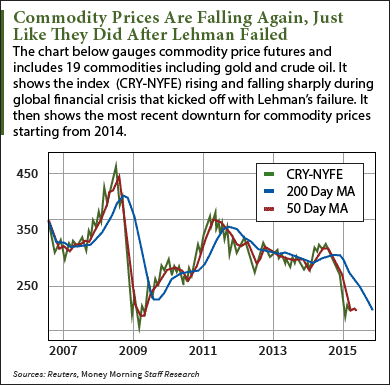 Some political insiders told Reuters that Abe is trying to use G-7 statements on the global economy to thwart attention from a domestic fiscal package he has in mind. This package would include a rise in the nation's sales tax to 10% from 8% planned for next April.

While G-7 leaders agreed with Abe that flexible spending is needed to speed up global growth, particularly in emerging markets, they did not concede that the current economic situation is on the verge of a worldwide financial crisis.

The G-7 Summit ends on Friday.

A Foreboding Trump: Donald Trump is suggesting that overvalued tech stocks could cause another stock market crash. In an interview with Reuters, the real estate mogul said that some tech companies are valued at billions of dollars - but have never made any money...

Thank you for stock plays.