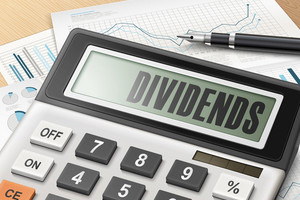 This company is one of only 17 to raise its dividend 50 consecutive years, according to suredividend.com. And it also boasts incredible revenue to back up its strong dividend.

In just a moment, I'll discuss why this stock is a perfect portfolio addition for income investors. But first, let's talk about why dividend stocks are so appealing…

You see, many companies keep paying dividends during market downturns or recessions. They do this to keep investors interested in their company. In fact, our dividend stock pick raised its dividend twice during the 2007-2008 financial crisis.

As a whole, dividends were able to recoup 21% of the S&P 500's decline from 2009, according to Josh Peters, director of equity-income strategy with Morningstar. That's about two years faster than it took for the broader markets to completely recover.

You'd be a millionaire.

Now that we've looked at why dividends offer great income and reinvestment opportunities, let's look at one of the safest and most dependable dividend stocks to buy….

The Most Stable Dividend Stock to Buy Now

Proctor and Gamble Co. (NYSE: PG) is one of the safest dividend stocks you can buy on the market today. As of this year, the consumer goods company has raised its dividend 60 consecutive years.

Founded in 1837, Proctor and Gamble has a long history, but its core business hasn't changed over the years. With a market cap of $216 billion, it is the third-largest consumer goods company in the world, behind Apple Inc. (Nasdaq: AAPL) and Toyota Motors Corp. (NYSE: TM). And the company boasts more than $70 billion in sales a year.

One of the best qualities about P&G is its commitment to its investors. The company returns nearly 100% of its profits to its shareholders through dividends and buybacks.

Analysts expect the company to have earnings growth of 7.6% for the next five years. Along with its 3% dividend yield, this gives Procter & Gamble an expected total return of more than 10% a year.

P&G's success comes from its diversified brands of necessity goods. Many of the products that Procter & Gamble sells people simply can't live without. That has fueled the company's tremendous growth over the years.

But this profit decrease has also forced P&G to restructure, which has made it an even stronger investment. The company has taken steps to refocus on its core brands and has enlisted a new CEO to ensure a steady transition.

PG stock is currently trading at a slight premium. So wait until PG stock dips farther below its 52-week high of $83 if you're interested in buying it.

The Bottom Line: P&G stock is one of the best long-term dividend stocks for income investors. Although it's going to face some growing pains for the next few years, expect the company to continue its commitment to raising its dividend annually.

Your Retirement Is Being Threatened: Puerto Rico's debt crisis could have a direct impact on your retirement fund – even if you don't personally own Puerto Rico bonds. Read more…