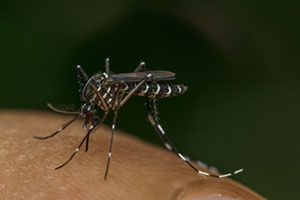 The U.S. remains woefully underprepared for the cost of Zika...

Have a look at the sheer numbers associated with the Zika virus:

While Zika is primarily transmitted through bites from an infested mosquito, it can also be spread...

And that last form of transmission is what's got the world on edge.

You see, the virus has been linked to a serious birth defect called microcephaly. It is characterized by a malformed or smaller head and brain and can result in severe neurological problems for which there is no cure. There is no vaccine available for Zika, and researchers predict a vaccine will take three to five years to develop.

"The reality is one bite, and if you're pregnant, your baby might be harmed," Dr. Anne Schuchat, principal deputy director at the Centers for Disease Control and Prevention (CDC), told a panel at the Woodrow Wilson International Center for Scholars yesterday, according to NBC News. "That's a phenomenal problem."

So far there have been 544 confirmed cases of Zika on U.S. soil -- all travel-related, according to the CDC. Pregnant women account for 157 of those cases. 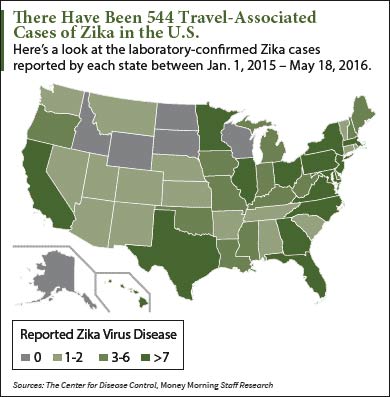 Needless to say, the urgency of the situation is very real.

Yet currently members of Congress are at loggerheads over how and where to appropriate funds needed to address the financial cost of the Zika virus...

The Cost of Zika in the United States: Here Are the Numbers

On Feb. 22, the White House requested that Congress consider allotting $1.9 billion for emergency funding to combat the Zika virus.

Congressional Republicans responded by claiming the administration doesn't need all that money. They claimed the White House failed to present an adequate plan or answer particular questions about how the money would be spent. They also said it was as though the White House was asking for a blank check.

A months-long congressional fight ensued, during which time the White House was able to shift a smaller $500 million sum, which had been earmarked for fighting Ebola, to instead use for Zika research.

On Thursday, Senate Democrats concocted their own government measure to combat the virus, which was passed on Thursday and boasted a $1.1 billion allotment.

And this is where the funding impasse currently stands. The two chambers will have to reach an agreement before they can send it to the president.

Of course, both the House and Senate will have the rest of Memorial Day week off. And multiple congressional aides admitted to CNN yesterday that they don't expect a deal on the Zika funding bill before the recess...

Meanwhile, in Baltimore, a panel of nearly three dozen experts convened Monday at The Johns Hopkins Hospital in a fact-finding effort to understand the financial and human toll of Zika virus infections in the continental United States.

At this panel, researchers from the Johns Hopkins Bloomberg School of Public Health presented an economic model that calculated the cost of medical care and lost productivity from Zika in just six southern U.S. states.

Their findings were dismal, to put it lightly....

The cost of the Zika virus, the researchers suggested, could easily surpass $2 billion -- and that's if only 2% of the population in the region becomes infected.

"The financial -- and human toll -- would be far higher if more people were infected in those states or beyond, a scenario public health officials described as inevitable Monday during a panel of close to three dozen experts," reported The Baltimore Sun yesterday.

Other members of the Hopkins panel -- from government, private, and academic posts - discussed how, thus far, funding for the short- and long-term Zika response has been left to state and local governments to handle.

For example, states and territories can now apply to the CDC for funds to fight Zika locally. More than $85 million in redirected funds identified by the Department of Health and Human Services has been made available to support efforts to protect Americans from Zika infection and associated adverse health outcomes, including microcephaly.

But these funds are chiefly for the use of rapid identification and investigation of a possible outbreak of Zika virus disease, reported the CDC on May 13.

Prevention, it seems, is being left solely to local governments...

On May 17, New York Gov. Andrew M. Cuomo announced a comprehensive action plan to combat potential transmission of the Zika virus in communities across the state. The governor's plan includes enhanced trapping and testing throughout the entire downstate region and distribution of free Zika protection kits for pregnant women.

Similar programs are being launched in various states across the country:

Of course, funding for these local programs is coming from earmarked monies meant to go elsewhere.

By the way, The World Bank released an analysis today that makes the Hopkins researchers' $2 billion sum projection look like pocket change...

By studying four categories of spending -- direct outlays, lost productivity, loss from death, and the impact of avoidance - The World Bank projects the Zika virus will wind up costing the United States a whopping $3.5 billion in the end.

China Is Gearing Up for War: According to the Pentagon, China's People's Liberation Army (PLA) is preparing for a major military conflict. China, however, paints a different picture for its increase in military spending...