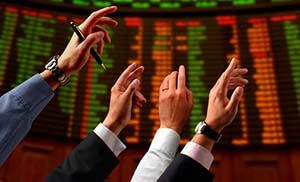 On Friday, the central bank chair told the nation that an interest rate hike this summer would be appropriate. Citing the health of the labor market and other improving economic data, Yellen dismissed concerns about the weak growth levels experienced during the first quarter of the year.

Last week, the expectations of a hike surged from a probability of 4% to 28%, according to CME FedWatch. It will be a busy day of economic data, setting the tone for more rate hike speculation.

The rate hike expectation has investors in a bit of a holding pattern this morning. Yesterday, St. Louis Fed President James Bullard said that the markets are "well prepared" for a rate hike.

Dow Jones futures were up 35 points as investors eye the central bank and a very important meeting by members of OPEC.

First up, investors are keeping a close eye on the monthly consumer spending figure, as any uptick in inflation in April will provide the Federal Reserve with more justification to increase interest rates during its June meeting. Economists anticipate that consumer spending increased by 0.2% in April.

Meanwhile, in deal news, Great Plains Energy Inc. (NYSE: GXP) – the firm that owns Kansas City Power & Light – announced plans to purchase Westar Energy Inc. (NYSE: WR). Westar is the largest utility firm in Kansas, and the deal was worth roughly $8.6 billion. The announcement pushed shares of Westar up more than 12% in early this morning.

Crude oil prices were mixed thanks to output data released by the global cartel known as OPEC. According to Reuters, oil output in the Middle East surged last week, and Iran has said it will boost its supply levels to at least 5 million barrels per day by June. The country refuses to join its cartel partners in a possible production freeze, hiking concerns about the return of a global supply glut. Brent crude prices were off 0.3% as traders eye the June 4 meeting among OPEC producers in Vienna, where they will discuss ways to provide support to global oil prices. OPEC's key partners are widely expected to aim for a price level of $65 per barrel in the months ahead.

Meanwhile, a gain in WTI prices of 0.6% corresponded with the start of the summer driving season in the United States. Drivers hit the road for Memorial Day weekend, prompting a decline in short options for the market.