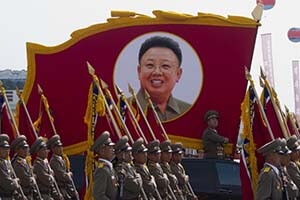 North Korean soldiers at a military parade in Pyongyang in July 2013.

The publication hailed the real estate magnate as a "wise politician" and a "far-sighted presidential candidate" who has the potential of bringing about unity on the Korean Peninsula.

"In my personal opinion, there are many positive aspects to the Trump's 'inflammatory policies'," wrote Han Yong Mook, a self-ascribed Chinese scholar on North Korean policy. "Trump said 'he will not get involved in the war between the South and the North.' Isn't this fortunate from North Koreans' perspective?"

Han was referring to Trump's speech on March 26, when the billionaire businessman stated he was open to the idea that both Japan and South Korea develop their own nuclear weapons in order to withdraw U.S. troops from their soil.

"Yes do it, now," he wrote. "Who knew that the slogan 'Yankee Go Home' would come true like this? The day when the 'Yankee Go Home' slogan becomes real would be the day of Korean Unification."

In the east, the "Yankee go home" slogan derived from post-World War II sentiment in Japan, where to this day there remain U.S. military installations that house some 36,000 U.S. military personnel. The phrase spread in popularity throughout the Eastern Asian region over the years and is now familiar worldwide.

Han's editorial also took a shot at Democratic front-runner Hillary Clinton. "The president that U.S. citizens must vote for is not that dull Hillary, who claimed to adapt the Iranian model to resolve nuclear issues on the Korean Peninsula - but Trump, who spoke of holding direct conversation with North Korea."

The unprecedented North Korean editorial comes amid repeated calls for dialogue between Seoul and its northern neighbor. On May 17, the North Korean state-run media outlet NKNews published a government statement in hopes of improving relations with Seoul, notifying the South Korean government of the north's willingness to resume inter-Korean military talks.