The market has an admirable ability to completely disregard reality. Just look at the S&P 500's 2.3% gain last week.

We don't have that luxury, so I spent the last week grappling with it.

Now, like me, none of these individuals is a "consensus thinker" – each of them brings unique, out-of-the-box insights into markets that are infinitely more valuable than what is available in the mainstream financial press.

The food and entertainment at the Mauldin conference were wonderful. The outlook, considerably less so.

So today I'm going to tell you exactly what's got us so worried. Then I'm going to give you the same investment recommendation and the same warning I gave the conference: Buy this before the Fed blows the wheels off the economy…

Why the Smartest Money in the Market Is Worried 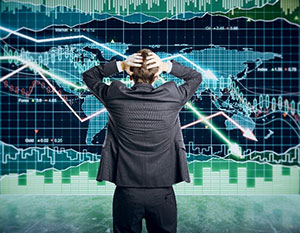 Almost without exception, their message was uniformly negative – stocks are expensive, the world has too much debt, monetary policy is failing, fiscal policy is non-existent, and radical changes are needed to avoid a market correction or worse.

There were deep concerns about the upcoming presidential election that offers a choice between a continuation of the failed policies of the past eight years… and a wild card.

My message to the audience who came to hear Barry Habib, David Hay, and Anderson Fisher speak about the credit markets is that the Federal Reserve and other central banks have destroyed bonds as an investment.

Even those fortunate to earn mid-single digit returns in mortgages or fallen-angel bonds are losing money when their nominal returns are adjusted for the rising cost of everything (except energy) in the real world and central bankers' efforts to destroy paper currencies.

This is what happens when, as Jim Grant calls them, we allow "former tenured economics professors" to run the world, right into the ground.

Even the wealthy don't have many attractive options in this zero-interest-rate world: They can lose money to the markets or the taxman, or they can act to maintain the value of their capital (and take on illiquidity risk) and lock it away for years in private equity or similar funds.

In a moment, I'm going to recommend you do the same thing I advise all my accredited, high-net-worth clients to do.

But first I'll tell you when the market is likely to return to severe volatility.

On Friday, Fed Chair Janet Yellen said, "It's appropriate for the Fed to gradually and cautiously increase our overnight interest rate over time, and probably in the coming months such a move would be appropriate." Of course, she could (and should) have been saying that every time she was asked the question for the last two years and more, but that is beside the point. There is increasing consensus building inside the Fed that another measly 25-basis-point rate hike is necessary.

The markets are less convinced and – much more importantly – unprepared for such a move.

For the June 14-15 Fed meeting, the probability of a rate hike was only 34% at Friday's close (based on Treasury futures), according to Bloomberg. The odds of a July rate hike are higher at 57.8%.

The difference is largely due to the fact that the United Kingdom electorate will vote on June 23, 2016 (i.e. after the June meeting) on whether to exit the European Union. The Fed may be reluctant to do anything before the outcome of that vote is known, since an "Exit" vote – unlikely as it is – would shake global markets.

Nonetheless, the markets continue to question whether the Fed will raise rates this summer. And that means that markets are not priced for such a move.

When the Fed raised rates in December 2015 for the first time in eight years, it triggered a 10% sell-off in stocks and a similar move in the high-yield bond market. Both markets have since recovered, but we might be watching the same movie again in the next couple of months.

For the moment, however, markets seem oblivious to the possibility of higher rates which, while absolutely necessary to return markets and the economy to normalcy and health, are going to inflict short-term pain on a highly leveraged Corporate America.

I've said before, U.S. corporations are much more leveraged than they were before the 2008 financial crisis. There is one and only one thing protecting them from the adverse consequences of all of the money they borrowed to buy back stock, raise dividends, and buy other companies at inflated prices to underinvest in: low interest rates.

With every ratcheting up of interest rates, corporate earnings and cash flows will be pressured, much more so than they are now.

How to Survive a High-Yield Horror Movie

That is why despite its rally off the lows early this year, the high-yield bond market is filled with zombie companies whose bonds are trading at distressed levels that effectively reset their cost of capital and set them on the path to insolvency.

That is also why the stock market, despite trading near all-time highs, is littered with broken and toxic stocks – not only in the commodities and energy sectors, but in retail and other key industries.

Debt is great until you have to pay it back – then it's not so great. When the note is due and no one can pay up, the markets will simply descend into chaos.

That's just one of the reasons I'm a huge fan of gold – because it's a hedge against volatility and it protects against inflation and deflation. It's some of the best insurance you can buy, which is why I currently recommend that all Sure Money readers and high-net-worth clients load up and increase their gold exposure heavily.

To do that, investors should look at Sprott Physical Gold Trust (NYSE Arca: PHYS). It's one of my two preferred gold stocks, although it is itself a major shareholder in the other.

It's traded at as much as a 12% discount to net-asset value (NAV), though now it's trading at just pennies higher than NAV, and it sports a 0.35% management fee and just 0.07% administrative fee, so it's extremely easy to own. Americans can elect for long-term capital gains treatment on units held for more than a year, too.

Of course, the physical metal is just as important to own. I typically buy my favorite kind of gold coin from three of my preferred dealers, all of whom I've recommended to my Sure Money readers. To get those gold profit and protection recommendations, along with all my Sure Money updates, click here.

Micheal the mood here in the UK is changing rapidly, there is a real move towards exit of the EU, It's going to be a very close run vote, The main reason being the influx of immigrants, and shortage of housing, The influx of immigrants has put huge pressures on our services and health care and a lot of Brits are saying no more. The government is saying house prices will collapse if we leave, that is a good thing as they are so over priced the first time buyers can't get a mortgage unless they are prepared to gamble… Read more »

Thank you for the heads up. Do you think Rand and Ron Paul will be successful in getting Congress to audit the Fed?

I would say the chances of auditing the fed are about the same as banks stopping market manipulation or allowing a true count of how much gold is held by the FED.
Maybe in 4 or 5 years when Americans riot and storm the holdings facilities they will find them empty.

Mr. Lewitt doesn't mention owning gold miners stick or ERFs. Are these a viable alternative to owning physical gold in this situation?

No. Assuming you actually are referring to gold miners' stock (not stick) or ETF (not ERF). These are suited for people with a time horizon measured in days, weeks and months. Shares cannot be redeemed for physical gold and paper transactions do not provide you with protection against market volatility. Thank you Fred Goldstein.

The remarks are of good sense: "stocks are expensive, the world has too much debt, monetary policy is failing, fiscal policy is non-existent, and radical changes are needed to avoid a market correction or worse." I can't agree more except on the last part that radical changes are needed. What's needed is time and creative destruction. Capital needs to be more expensive and directed at the right venues. Technology will improve productivity hence real GDP growth, while a lot of wealth needs to be destroyed in global financial markets. It is beyond any single government's ability or will to change… Read more »