Where better to look for clues to the next stock market crash than to some of Wall Street's most powerful and greedy players — hedge fund managers.

Generally distrusted and disliked by retail investors, hedge fund managers can serve a useful purpose when clouds are gathering on the market horizon.

Because hedge fund managers spend their days studying not just individual stocks but all the forces affecting the markets – from U.S. economic indicators to what the Chinese yuan is doing – they're among the first to get wind of a possible 2016 stock market crash.

And their single-minded devotion to act in their own self-interest means they'll start shifting their investing gears the second they smell trouble. 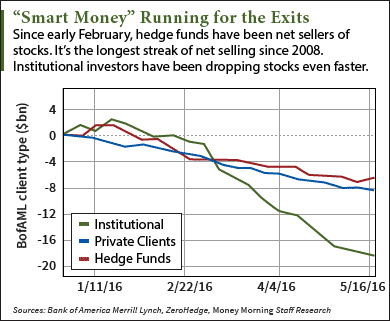 "The top 50 hedge funds sold off U.S. equities for the second consecutive quarter. Funds unloaded nearly $55 billion worth of shares in U.S. equities during the first quarter, which was more than triple the value removed in Q4," FactSet analyst Andrew Birstingl wrote in a research note last month.

Bank of America Merrill Lynch has been tracking the same trend. Hedge fund managers have done net selling since early February, the longest such selling streak since the financial crisis of 2008.

Equally ominous is that institutional investors have also been selling stocks – and at a rate higher than the hedge fund managers.

When this much "smart money" is moving to safer ground, it amounts to a massive, collective bet that a stock market crash is imminent.

Several of the biggest names in the hedge fund world have made it clear they're worried about a stock market crash 2016.

At the end of April, activist investor Carl Icahn said in a CNBC interview that the stock market is nearing "a day of reckoning." And he's put his money where his mouth is. According to SEC filings, Icahn Enterprises (Nasdaq: IEP) has a net short position of a whopping 149%.

Likewise, billionaire investor George Soros cut back his holdings in U.S. stocks by 37% in the first quarter of 2016. An SEC filing revealed that Soros now owns bearish options on 2.1 million shares of the SPDR ETF Trust (NYSE Arca: SPY), an exchange-traded fund that tracks the Standard & Poor's 500 Index.

Soros has expressed concern about the massive debt in China, likening it to the situation in the United States just prior to the 2008 financial crisis. In January Soros said a hard landing for China's economy is "practically unavoidable."

Other hedge fund managers also have pointed out signs of a looming stock market crash.

Stanley Druckenmiller, who once worked with Soros on the legendary Quantum Fund, started pulling out of stocks last year. In a speech last month Druckenmiller also cited the Fed's easy money policies and warned that "higher valuations … limits to further easing, and excessive borrowing from the future suggest that the bull market is exhausting itself."

Assuming we do face a stock market crash – one that could strike as early as this summer – that leaves the question of what investors should do to protect themselves.

How to Prepare for a 2016 Stock Market Crash

With so many investment classes at risk in a stock market crash, many hedge fund managers are turning to the time-tested safe haven of gold.

They've been taking the capital freed by their sale of stocks and loading up on the yellow metal.

Druckenmiller has put $323 million into gold. Greenlight Capital's David Einhorn has 20% of his portfolio in gold now. Eton Park's Eric Mindich has invested $422 million in the SPDR Gold ETF.

"Gold is some of the best insurance you can buy," said Money Morning Global Credit Strategist Michael E. Lewitt. "It's a hedge against volatility and it protects against inflation and deflation."

Lewitt, too, thinks a stock market crash is likely. He pointed out that U.S. corporations are now more heavily leveraged than they were prior to the 2008 crisis. And when interest rates rise, the consequences will be ugly.

"Debt is great until you have to pay it back – then it's not so great. When the note is due and no one can pay up, the markets will simply descend into chaos," Lewitt said.

The Bottom Line: You can tell hedge fund managers expect a stock market crash by the moves they've been making. As a group, they've been dumping stocks and buying gold. Retail investors who want to protect their investments should also tuck some money into the yellow metal, whether it be a gold miner or an ETF.

How China Could Blow Up the Markets: China's economic miracle is running on fumes these days, but neither Chinese officials nor that nation's cheerleaders on Wall Street will admit it. The fact is the Chinese government has effectively engineered an economic implosion that all but guarantees a global stock market crash. Here's why China is a financial powder keg…