The Dow Jones Industrial Average today (Thursday, June 2) added 48 points and the S&P 500 hit its highest level since November. The rally in healthcare stocks was the primary boon for the broader markets. As usual, chatter on the trading floor centered on the timing of the next interest rate hike and the state of the global oil markets.

The data indicates the service sector accounted for virtually every job created. 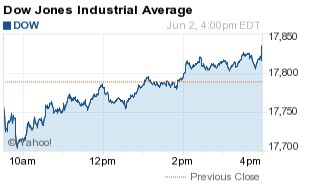 DJIA Today: Brexit Expected to Affect the Timing of the Next Interest Rate Hike

First up, the U.S. Federal Reserve is back in focus as the central bank prepares for its upcoming monetary policy meeting on June 14-15. Tomorrow's jobs report will be critical to the timing of the next interest rate move. A string of positive data – including a major boost in April consumer spending – has many investors expecting a hike either this month or in July.

However, Fed Board Governor Daniel Tarullo said this morning the central bank will have to consider the decision by UK voters over the possible Brexit when exploring the timing of the next rate hike. UK voters head to the polls after the June meeting, which suggests that if the central bank is very concerned about the health of the European economy, it will likely wait until July to consider a vote.

This morning, ahead of the Brexit vote, the European Central Bank announced it is holding its interest rate level in place. ECB Chair Mario Draghi said in a speech earlier he anticipates inflation and growth will increase the second quarter. He listed the Brexit and broader macroeconomic risks as threats to the Eurozone, where GDP expanded by a meager 0.5% in the first quarter and unemployment remains above 10%.

In deal news, Johnson & Johnson (NYSE: JNJ) announced it will purchase private hair-care giant Vogue International in an all-cash deal worth roughly $3.3 billion. The firm is looking to gain market share and increase its product offerings.

Meanwhile, shares of Tribune Publishing Co. (NYSE: TPUB) slumped 1.8% after the newspaper giant reelected all of its board director nominees. The decision likely signals the firm will continue to reject future takeover bids from rival Gannett Co. Inc. (NYSE: GCI).

Next, Apple Inc. (Nasdaq: AAPL) slipped 0.8% after it received a price-target cut from investment bank Goldman Sachs Group Inc. (NYSE: GS). The investment bank cut its AAPL price target from $136 per share to $124 per share due to a reduced iPhone sales forecast. Goldman anticipates the technology giant will sell 1 million fewer devices than it previously projected.

But the big news today was happening in Vienna, Austria. Today, OPEC failed to reach a production agreement for the second time in 2016. It was the first meeting attended by Saudi Arabia's new energy minister Khalid al-Falih, who assumed the role on May 7. Saudi Arabia and the other dominant OPEC players saw little pressure to cap production as oil prices have risen roughly 80% since February lows.

Crude oil prices were largely flat on news of the meeting and the EIA's report of a 1.4 million barrel decline in inventories last week. That decrease offset concerns about growing supplies in the wake of OPEC's decision this morning.

The 5 Most Significant IPOs to Watch This Year: There was hardly any IPO activity last year. But we're tracking these five companies to see if they'll go public in 2016. If they do, they'll be the most promising deals of 2016…