Last week's May jobs report, which showed the weakest hiring in six years, gave Janet Yellen all the cover she needed to kick the can down the road on interest rates and put off any hikes until July or September.

The markets reacted well, as you'd expect, but Yellen left the door open, saying the Fed was "on track" to raise rates "in the coming months." And with that statement, Yellen has consigned investors to yet another cycle of uncertainty and hand-wringing where the markets have to guess what the Fed will do in July or September.

Here's the thing – the vast majority of investors don't understand that rising rates can be terrific for you and your money if you know what to look for and how to identify the best stocks to buy ahead of time, before the markets price a move in.

If you're one of 'em, don't beat yourself up too badly. It's a common misconception.

The next "rate riot" can be a fabulous opportunity, just as it was 16 months ago when I brought three recommendations to your attention under very similar market conditions and circumstances. Anybody who jumped on board has had the opportunity to capture returns of 41.98% versus only 0.86% from the Dow Jones Industrials over the same time frame.

One of the three stocks remains an especially compelling choice today.

Don't miss your chance just because the U.S. Federal Reserve might hike rates.

Millions of investors mistakenly believe that rate hikes spell the death of equities.

The only problem is that's simply not true.

Don't get me wrong. A rate hike is not pretty.

There have been six rate hikes since 1983, and the markets were up an average of 14% over the 250 days immediately preceding the first rate hike, according to Nuveen Asset Management's Robert Doll and Scott Tonneson.

My numbers show that the markets dropped by about 10% "peak to trough" – meaning from top to bottom – when the rate hikes hit. But here's what most people are missing… 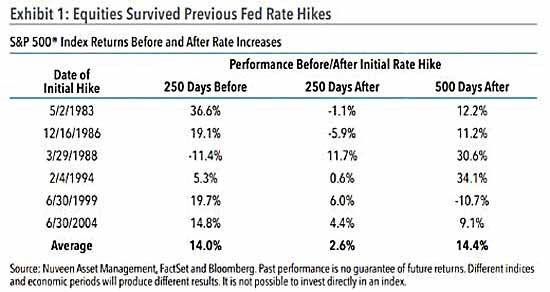 So much for conventional wisdom.

The other thing to think about is that investors are making a huge stink over what could be less than a quarter-point increase. Even if the Fed were to hike rates four quarters in a row, we'd still be talking about a fed funds rate that's only 1% to 1.25%. That's still extremely low in the scheme of things.

What's interesting about all this is that CEOs have been preparing for rising rates for a long time. That's why you're seeing billions spent on buybacks, mergers and acquisitions, and capital expenditures.

Unlike investors who fear the repercussions of rising rates, CEOs are taking steps to increase value when they eventually come to pass. When you hear me talk about why I'd bet on CEOs over politicians and individual sentiment, this is what I'm alluding to. They're making bets to ensure survival and profitability in anticipation of a time when the markets will make that seem like an impossibility.

My point is that low rates are not the limiter everybody thinks. Instead, they're a form of capital discipline that ultimately leads to far more stable performance over time and, most importantly, the best upside profit potential.

This Play Is Beating Markets 48-to-1, with More Upside to Go

Let's talk for a minute about how you identify those companies with the most to gain when the rate hikes hit. That way you can make lemonade from the lemons other investors are going to get stuck with when Yellen finally makes her move.

The first thing to look for is strong growth. That sounds obvious, but most investors run straight to the bottom line, making the mistaken assumption that that's all that matters.

That can cost them simply because you can't grow what you don't have. Sales have to be expanding to ensure long-term earnings growth. No doubt you can play games like many companies have since the Financial Crisis began to expand earnings by boosting efficiency, but companies with the most potential like those we follow closely never lose sight of the top line.

Your odds of finding just such a choice jump dramatically when they're tied into one or more of our Unstoppable Trends. That's because every Unstoppable Trend is backed by trillions of dollars that the Fed cannot screw up, Wall Street cannot hijack, and Washington cannot legislate out of existence.

The company continues to plot a path higher while putting up numbers that other companies would love to have. Quarterly revenue growth is 6.40% year over year while quarterly earnings growth is a healthy 2.50%. Admittedly, those don't sound very sexy, but they're not supposed to be.

American Water Works sells a product – water and water treatment – that you literally cannot live without to more than 15 million people in 47 states and into Ontario, Canada. As such, it's a rock-solid choice intended to shield you from the volatility leading up to and following the first rate hike when it hits.

The company continues to pick up customers and market share, especially as they relate to natural gas companies in the Appalachian Basin who need water and water-related services to produce. What's more, it has the power to increase prices over time.

In addition, the company is working closely with the United States Military Services Group and takes over operations at California's Vandenberg Air Force Base this month, bringing the total number of bases serviced to 12. That's potentially a very lucrative set of contracts at a time when spending is tight and getting tighter. But, again, you cannot live without water any more than you can run a military without water.

It's worth noting that American Water Works is actively expanding into geothermal energy and desalination, both of which are potentially very high-margin activities. Neither may pay off immediately, but both are high-probability moves for the future.

The 41.98% run since I recommended it as a hedge against rising rates may be well underway, but it's hardly over against the increasingly focused backdrop of rising rates. All told, the company's 41.98% return since I brought it to your attention on March 11, 2015, represents a stunning 48-to-1 outperformance over the Dow's measly 0.86% return in the same time frame – and I have every reason to expect the dramatic outperformance to continue.

Remember, there's always a bull market somewhere – and my job is to help you find it.

About the Author: Keith has spent the past 35 years dedicated to helping millions of followers navigate some of the toughest market conditions in history. This year alone, his Money Map Report readers have been able to do almost 10 times better than the broad markets, with average gains of more than 30% earned from investing in unstoppable trends all over the world. To learn more about these investing trends, click here.

please give me a detail lesson on option trading. Thanks