The Dow Jones Industrial Average today (Friday, June 3) fell 31 points on the heels of a disappointing May jobs report. The numbers indicated the rose-colored glasses worn by Fed officials in recent weeks aren't reflecting the true state of the U.S. economy. After several rounds of speeches by Fed officials in which they touted economic growth, job market resiliency, and projected multiple rate hikes by December, the dismal employment report likely spoiled their summertime monetary plans.

Here's everything you need to know about the markets on June 3, 2016. 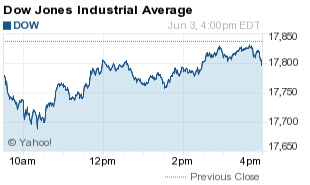 First up, the good news was the official U.S. unemployment rate fell to 4.7% in May. The bad news: The U.S. economy created just 38,000 jobs, falling well short of economist expectations. Forecasts called for 158,000 new jobs.

Economists argued the numbers were likely going to be held down due to the massive strike by workers at Verizon Communications Inc. (NYSE: VZ). However, this big of a miss is hard to blame on just one factor. The weak jobs report sent gold prices today soaring more than 2.5%, as investors don't expect the U.S. Federal Reserve to raise interest rates in the coming weeks.

The weak jobs report reduced the odds of an interest rate hike in June from 21% to just 4% after the announcement, according to CME FedWatch. The more important figure is the expectation of a rate hike in July. That figure fell to 34%, just days after it was becoming a foregone conclusion that the central bank would take action in the early summer.

The weak jobs report also took its toll on crude oil prices as lackluster job growth renewed concerns about the resilience of the U.S. economy. WTI crude prices fell 1.1% to $48.62 after Baker Hughes Inc. (NYSE: BHI) reported an increase in the domestic rig count. The recent rebound in oil prices from February lows fueled an increase of nine rigs last week. This is only the second time that weekly rig data came back showing an increase.

Brent crude was down just 0.8% to $49.64, despite yesterday's failure by OPEC to reach an accord on oil production. That's because crude has faced supply disruptions across nations like Nigeria, Venezuela, Libya, and Canada. The worst problems are taking place today in Nigeria, where militants continue to attack the nation's oil infrastructure with promises to cripple the nation's energy supply.

Oil prices suffered one of the worst crashes in modern history from June 2014 to February 2016. But the WTI crude oil price has seen a huge rebound over the last month, and there's one reason why they'll go even higher this year…