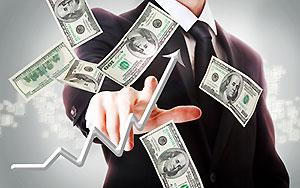 Dow Jones Industrial Average News, 6/06/2016: Central bankers at the U.S. Federal Reserve have egg on their face after Friday's dismal jobs report indicated that the health of the U.S. economy is not at the level of performance they'd been stating in recent weeks.

Although the cooked "official" unemployment rate hit 4.7% in May, the nation created just 38,000 jobs.

Today, Fed Chair Janet Yellen will speak twice as traders have questions about her strategy moving forward with interest rates. The Fed chair is slated to give a speech later today at the World Affairs Forum of Philadelphia.

Dow Jones futures gained 36 points as traders' expectations for the next interest rate hike plunged after Friday's disappointing jobs report. In May, the U.S. economy added much fewer jobs than economists had expected, but consumer spending is booming at levels not seen since 2009.

First up, the National Association for Business Economics cut its 2016 GDP expectations for the third month. NABE members now foresee U.S. growth slipping to a rather bleak 1.8%. That's a significant decline from the 2.2% the association had previously projected. The association cited concerns from the ongoing U.S. presidential election.

Swiss voters rejected a plan to guarantee $2,500 per month in basic income. On a plan that literally would have given every citizen money for nothing, roughly 80% of voters turned it down. Basic income guarantees (BIG) have been considered for decades, as former President Richard Nixon supported a similar plan in the 1970s. However, this formal vote will likely deter other nations from considering the plan for some time, even with concerns about robots replacing humans in the workforce continuing to accelerate.

On the banking front, investment firms on Wall Street are offering far greater employee-friendly policies. Goldman Sachs Group Inc. (NYSE: GS) said that it received 250,000 applications for summer jobs from students and graduates, news that suggests that the best and brightest are still angling for positions on Wall Street. Meanwhile, JPMorgan Chase & Co. (NYSE: JPM) announced plans to allow employees to dress business casual, a radical departure from previous policy, after the firm cited an increasing trend of dressing down by company clients.

Crude oil prices rallied again on Monday thanks to a slumping U.S. dollar and supply concerns after yet another attack on the oil infrastructure of Nigeria. Fleeting expectations of a rate hike pushed the dollar lower. Meanwhile, militants in Nigeria have sworn they will keep attacking the nation's energy rigs until they completely halt all production in the country. WTI crude oil was up 2.2%, while Brent crude added 2.1% and topped $50 per barrel.

Watch These Five Companies in 2016… There was a huge absence of IPO activity last year. In fact, only 170 companies went public in 2015 – down from 275 the year before. But 2016 is about to change all that as some of the biggest companies in the world prepare to hit the market. Here are the five we're keeping an eye on…
Join the conversation. Click here to jump to comments…

6227 Reads
Should I Sell My Stocks as the Coronavirus Hammers the Market?
The coronavirus has created a massive selloff in the markets, but is now the time to sell your stocks? Here's what you need to know now...