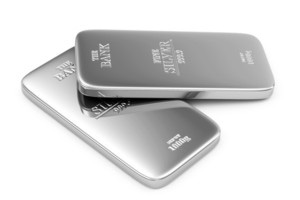 First, here are the two reasons why silver prices are up today…

You see, the chances of the Fed raising interest rates this summer have recently diminished. After the dismal May jobs report showed only 38,000 jobs were added during the month, odds of a June rate hike fell to a slight 4%. Prospects of a rate increase in July slipped from 42% to 36%. For September, chances of the Fed lifting rates currently sit at 51%.

Some analysts are even more dovish. For example, BNP Paribas doesn't see the U.S. central bank raising rates until 2018.

But the interest rate chatter isn't the only thing pushing the price of silver higher today.

Many regular investors are pouring money into silver as they grow increasingly wary of the upcoming Q2 earnings season. These people invest in silver as a way to hedge against broader market volatility. And with many companies expected to report dismal Q2 earnings, volatility may pick up.

According to FactSet Research Systems Inc. (NYSE: FDS), overall Q2 earnings for S&P 500 companies are expected to decline by 4.8%. If the broad-based S&P 500 Index reports an earnings drop, it will be the first time it has recorded five straight quarters of year-over-year earnings declines since Q3 2008 through Q3 2009.

S&P Global Market Intelligence reports full-year earnings estimates follow a similar pattern. They bottom out in early May, rise later in the month and into June, and fall until the end of the year. By that time, earnings forecasts typically end lower than where they were in early May.

While these projections may hurt the market, they will push the price of silver higher. In fact, Krauth says silver prices will hit this target for three interrelated reasons…

The Canadian fund allows investors to own silver without dealing with the costs of delivery, insurance, and storage. It boasts an $887 million market cap and is regularly audited and inspected. Shares of PSLV are up 25% so far this year.