What a difference a few trading days can make, especially in the gold markets.

By late last week, the gold price was beaten down after declining 3.6% over the previous two weeks. The surging U.S. dollar and talks of a June rate hike both weighed on the price of gold during that span.

But then came the hugely disappointing jobs report, and all bets were off. Investors suddenly realized the U.S. Federal Reserve would be much less likely to raise interest rates this month. This caused the price of gold to surge by nearly $33, or almost 3%, within a matter of minutes.

While the June FOMC meeting will hardly influence gold prices now that a rate hike is off the table, investors are eagerly awaiting another big event. In fact, this rare global event will not only affect the gold market, but also the health of the global economy.

First, let's talk about gold's huge performance over the past week…

Why the Gold Price Surged This Week

After closing last week with a 2.5% jump following the jobs report, gold prices kicked off this week with an uneventful start.

The next session had a bit of weakness in store for the gold price. After opening way below the previous close, it eventually regained some ground to close at $1,243 for a 0.2% loss.

But gold prices saw renewed action on Wednesday as the DXY dipped below the critical 94 level. The metal added 1.2% to close the day at $1,262.30. Meanwhile, gold stocks – represented by the Market Vectors Gold Miners ETF (NYSE Arca: GDX) – were essentially flat from the previous day's close. 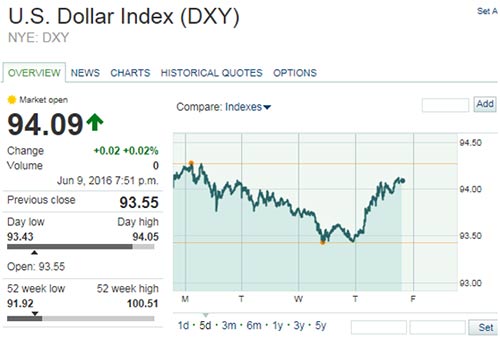 The rally in gold prices has also boosted gold stocks over the last few sessions. On Wednesday, the Gold Miners ETF closed at a 2016 high of $25.93. It's on track for a gain of 2.3% this week, which is a very bullish indicator for the overall gold market.

As I've said before, the health of the gold market has depended on prices hitting the 50-day moving average of $1,249.

Now that prices have surpassed it, there's one international event that will dictate whether or not they head higher from here.

This Event Will Dictate the Gold Price Path in 2016

Since passing the 50-day moving average on June 8, investors need to watch whether gold prices can hold gains above it for a few weeks. That would be a sign of positive momentum for the metal. 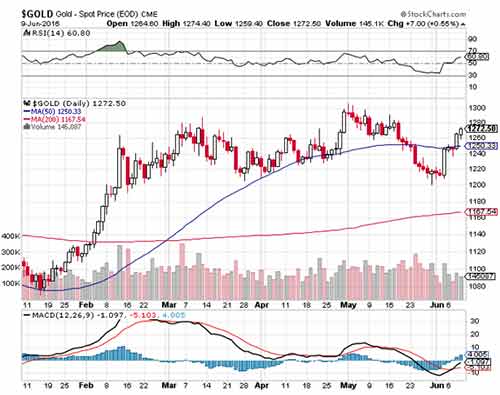 Of course, the next big event likely to affect the gold price will be the June FOMC meeting. But a rate hike looks extremely unlikely this month.

That's why we're looking more closely at Britain's "Brexit" referendum, which will take place on Thursday, June 23. I expect there will be a narrow vote to stay in the EU. The uncertainty surrounding the event – and whether or not Britons vote to stay in the EU – is likely to take some wind out of gold's sails for a little while.

But after that, there's this fall's U.S. election, which could be great for gold.

We'll keep you updated on gold's movement before and after the Fed and Brexit meetings this month.

today also, gold and dxy higher. i could look it up exactly but once when the dollar rose from 82 to 89 before falling back, gold rose right along with it. remember this…. a true gold bull market is when gold rises vs ALL CURRENCIES.