But what happens at this year's WWDC will have a much longer-term impact on AAPL stock.

WWDC, held every June, is an opportunity for Apple Inc. (Nasdaq: AAPL) to showcase new features in its operating systems to the developers who write all those iPhone, iPad, and Mac apps.

New hardware rarely debuts at WWDC; Apple saves that stuff for the fall. So Wall Street doesn't tend to get too excited about WWDC, preferring to save its breathless anticipation for the next new iPhone.

But at this year's WWDC, Apple will introduce software features that will have a ripple effect on the company's ability to grow revenue, serving as a big catalyst for Apple stock. Wall Street still may ignore WWDC, but savvy investors will recognize these announcements for what they are – another reason to own AAPL stock.

It's a shift that's reducing Apple's reliance on sales of devices like iPhones and iPads as it gets better at monetizing its 1 billion-strong customer base via services.

"Services don't cost a lot to acquire, nor do they cost a lot to provide, which means, of course, that more money comes to the bottom line," explains Money Morning Chief Investment Strategist Keith Fitz-Gerald.

The storyline on Apple stock for the past year has been that iPhone sales have peaked, so the company has no way to grow revenue unless it comes up with a dramatic new hit product. 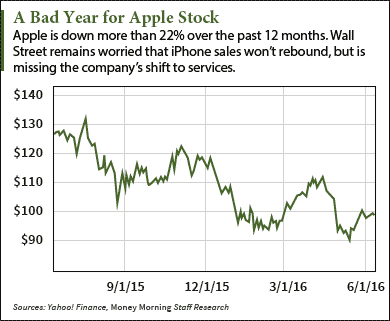 But the story has been quietly changing.

"Not many people realize this, but Apple now makes more money selling services than it does selling Macs and iPads. And services revenue contributed $6 billion to the top line in the most recent quarter — a 20% increase from the same quarter a year ago," Fitz-Gerald said.

But what intrigues Fitz-Gerald most is that the profit margins on Apple's services grew by 60% last year.

"This is what [Apple CEO Tim] Cook sees and what the vast majority of the investing public does not," Fitz-Gerald said.

And one 2016 WWDC announcement in particular will toss accelerant on this transition to more profitable services….

Why the 2016 WWDC Is a Difference-Maker for AAPL Stock

WWDC tends to focus on updates to Apple's family of operating systems – iOS for the iPhone and iPad, Mac OS, the Apple Watch OS, and the AppleTV OS.

But the key for Apple stock is a feature that soon will be common to all of Apple's operating systems: the Siri voice assistant.

This year's WWDC is expected to bring Siri to the Mac, the only Apple platform that currently does not support it. But that's not the good part.

Apple also is expected to open up Siri to third-party developers, which means the voice assistant will be able to work not just with Apple's built-in apps, but any app (if the developer chooses to add it, of course).

That will vastly increase the utility of Siri, and in turn make the Apple ecosystem that much more "sticky" for customers.

Siri is destined to be a vital cog in the Apple ecosystem as voice interaction with technology becomes the norm. That not will only help sell Apple devices, but will makes Apple's services more accessible and more interactive.

We know that consumers already are moving in this direction. According to data from Kleiner Perkins, the portion of U.S. smartphone owners who use the voice assistant more than doubled from 30% in 2013 to 65% last year.

This Acquisition Will Put Siri on Steroids

The Cambridge, UK-based company was called VocalIQ, formed in 2011 specifically to develop a superior voice interface. The goal was to create a voice assistant that was not only better at understanding what a person was saying, but could learn and improve with use.

Just before Apple bought it, VocalIQ ran a test to compare their progress to Siri, Google Now, and Cortana. The three voice assistants from the tech titans had a 20% success rate when given complex queries.

But VocalIQ had an astonishing success rate of more than 90%. VocalIQ also learns much faster than the others, can adapt to accents, is better at filtering out background noise, and remembers all previous interactions.

Now Apple is plugging this tech into Siri, which will be available across all of its products. IT will also be available for future applications such as an in-the-home voice assistant like the Amazon Echo or the much-rumored Apple Car.

As voice interaction becomes common, the inclusion of VocalIQ's unmatched technology into Siri will give Apple a huge competitive advantage in multiple areas – and serve as a major catalyst for Apple stock.

"Apple has a long history of reinventing itself at times when the market least expects them to," Fitz-Gerald said. "A couple of years from now it'll be worth $200 a share."

The Bottom Line: This year's WWDC event will carry much more significance for Apple stock than usual. By extending Siri to all of its platforms, opening it to third parties and adding top-flight voice interaction technology acquired last year, Apple is showing how serious it is about making Siri central to the company's success. With voice interfaces becoming the norm in the future, the new and improved Siri will play a big part in driving AAPL stock to $200 a share.

Best Stocks in a $6 Trillion Market: We are on the verge of a major shift in the technology world, a shift as important as the transition from PCs to mobile devices a decade ago. The Internet of Things – shorthand for how many of the things we use will "talk" to each other over the Internet – is exploding. And while big companies like Apple, Alphabet, and Microsoft will benefit, this group of companies stands to reap the biggest rewards…