Editor's Note: The bears are pricing Apple as though it's about to go out of business based on just one quarter's decline in iPhone sales. We think that's ridiculous, but it's a huge opportunity. So right now, Keith is going to show you some developments that prove Tim Cook and his team are in fact hard at work building a company that could better than double well before 2020. Here's Keith...

Apple Inc. (Nasdaq: AAPL) has been positively pounded over the past few months, and the stock is down more than 25% from a peak of $132.97 per share. Icahn's out, insiders are bailing, and iPhone sales are slowing... the list of "failures" is growing longer by the minute, or so goes conventional wisdom.

I'm not particularly worried - Apple is not going to "pull a BlackBerry" any time soon. 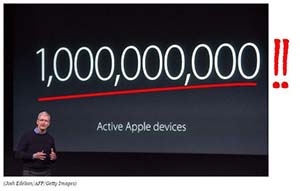 Basically we have a situation where the investing public still identifies with Apple as a growth company driven by devices at a time when CEO Tim Cook thinks of it in terms of an "ecosphere."

It's a fundamental mismatch based on perception... not reality... and, as a result, a great buying opportunity.

The company is priced as if it's going to go out of existence based on a 16% decline in iPhone sales during Q1 2016. And yet...

The Apple bears don’t seem to have caught on to any of this yet. That’s something we can use to our advantage.

You see, I believe it’s possible these shares could hit $200 in the next 24 to 36 months as public perception catches up with the reality Tim Cook & Co. are building today.

We're not alone in our thinking, incidentally.

Brian White of Brexil Hamilton reiterated a "Buy" and a $185 price target. UBS's Steven Milunovich was more conservative in a client note, but believes current prices reflect "product cycle bears" and stuck to his initial target of $115. But then he, too, came into my neighborhood noting that $200 a share isn't out of the question if the company hits another hardware home run.

It's important to remember that Apple has a long history of reinventing itself at times when the market least expects it to, which is why you want to concentrate not on the devices but on the higher-margin services it offers.

Not many people realize this, but Apple now makes more money selling services than it does selling Macs and iPads. What's more, services revenue contributed $6 billion to the top line in the most recent quarter, which represents a 20% increase from the same quarter a year ago.

That's not even the best part...

Apple's service business profit margins grew by 60% in 2015, and is growing even faster now as management continues to leverage its user base of - say it with me - more than 1 billion Apple devices.

Services don't cost a lot to acquire, nor do they cost a lot to provide, which means, of course, that more money comes to the bottom line.

This is what Cook sees and what the vast majority of the investing public does not... yet.

So, if you don't already own Apple, now's the time to get on board or risk getting left behind. It offers one of the best opportunities on the market to play one of my favorite Unstoppable Trends - Technology.

How Keith Does It

Technology is one of just six lucrative "Unstoppable Trends" Keith tracks to bring his readers some of the best investment recommendations on the markets today. These trends have been making fortunes for centuries, and they'll likely continue to do so throughout the 21st century.

These Unstoppable Trends can't be derailed by politics or market turmoil, so they've helped Keith and our entire Money Map team bring peak gains of 818% on Pharmacyclics and 543% on Westport Innovations, for instance, no matter what the markets were doing at the time. Click here to learn what these trends are and the two steps Keith uses to identify his winning investment recommendations.

Keith,
Can I get in on a thousand dollar share? would anyone be willing to talk to me with that small an amount? I'd like to try and pad my retirement….D.H.