Last week, I gave you a Fedspeak cheat sheet to help you decipher just what Fed Chair Janet Yellen said on Monday, June 6, and what it all actually means. Before this week's FOMC meeting, I want to dive a little deeper and show you just what the Fed is looking at when they make their decision... and what you should be watching, too.

As I've been telling you all week, the Fed is now in the business of moving markets. Global markets are now directed by central bankers around the world.

So the only thing that really matters is what the Fed does, what other central banks are doing and are likely to do.

By matters, I mean matters to the markets - and to your investments, your retirement accounts, and your future.

Today, I'll give you the skinny on the fat lies the U.S. Federal Reserve and other central banks feed us, and what to watch to keep ahead of the bedlam that's about to rain down on us if these mass manipulators lose their grip on the levers they've been pulling for years now.

And I'll show you a way you can profit from all this madness.

But first, here's a little lesson on how our central bank overlords operate... 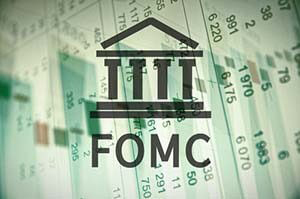 Now, more than ever, the "open market" component of the FOMC is their guiding light.

That's because markets aren't open any more. They've been massively manipulated by the Federal Reserve artificially holding interest rates down and by every other central bank around the world following suit.

The FOMC consists of the board of governors of the Fed and five of the 11 regional reserve bank presidents (there are actually 12 regional banks, but the NY bank's president is a permanent member on the FOMC). The committee got its name because it was designed to look at the market, presumably the economy (but now actual markets), and determine what they would do in the open market - by way of trading federal funds to fix the fed funds rate at a level commensurate with their policy objectives.

The New York Fed president is on the FOMC because it's the NY Fed that actually conducts the Fed's trading in the open market.

If the Fed wanted to lower the fed funds rate (that's the interest rate big banks charge each other for overnight and very short-term loans), they would go into the open market for fed funds, which every big bank has a trading desk to trade, and offer to buy Treasury securities from the traders. By buying massive amounts of Treasuries, the Fed would flush banks with credit (cash) that they don't make money on unless they lend it out.

So, with more cash to lend and more competition from other banks with cash to lend, they lowered interest rates on loans and those lower rates from the banks' fed funds trading desks trickled down through lending channels to make credit cheaper for commercial borrowers and consumers.

At least... that's how the Fed used to operate.

It's the Markets, Stupid

This all changed during the financial crisis.

Banks wouldn't lend to each other because they weren't sure if they'd get paid back.

The Fed had to essentially replace the fed funds market by directly injecting money into technically insolvent banks.

Then, since that wasn't enough to bring the banks back to life, just keep them on life-support, the Fed turned to quantitative easing. QE is nothing more than another direct injection of funds into America's big banks. The banks buy Treasuries from the government at auction and in the open market and the Fed buys them from the banks, flushing them full of money.

That's the game, folks. There are no more real "open market operations," just open manipulation of interest rates by the Fed and other central banks.

The problem is that it's not "the economy, stupid" anymore. Now, it's all about markets.

Instead of trying to stimulate economies - because that didn't work - the Fed and other central banks stimulated markets to engender rallies to inflate financial assets to make it look like economies were growing.

The trouble is, with global growth slowing again, markets are panicking.

Everything that the Fed and central banks have done seems like it could unravel. If there's no economic growth and markets start to reverse - or worse, crash - the world will see central banks are false prophets.

And that would mean we're in big, big trouble.

What the Fed is watching isn't the economy, no matter what they say. It isn't jobs numbers or GDP.

That's because we're all in this together.

Here's what that means for you... and what to watch.

What's happening is investors are selling stocks and buying bonds as a safety net.

The Fed's not going to raise rates as long as other sovereign government bond interest rates are tanking. If the Fed raises rates while counterparts' rates are falling, higher interest rates here will cause investors to sell other investments, equities and bonds, buy U.S. dollars, and spend those dollars buying U.S. Treasuries.

That will push the dollar higher, which makes oil and commodities prices slide. That's a market problem the Fed can't afford to get out of hand.

If Britain exits the EU and that causes a panic and hyper-selling of the euro - in the belief that if the UK exits, others will follow - that will lift the dollar and panic global markets more.

Besides watching the strength of the dollar, foreign government bond yields, a possible Brexit, and global markets, the Fed's watching the harbinger of all that action, which manifests itself in "volatility."

Volatility, globally, is cranking up quickly.

By my measures of volatility of equities and bonds, we've just moved up and out of a long sideways channel. Now, it's about the "rate of change" in volatility.

It's getting messy out there. The Fed sees that, and we all do, too.

That's what they're watching - global growth, foreign bond yields, and volatility - and what you should be watching, too.

As far as positioning ourselves, the first thing I like is buying the U.S. dollar here, as it should get stronger if more panic begins to set in.

There will be lots more positions to take if the current whiff of panic doesn't subside, if volatility doesn't quickly settle down.

And I'll tell you what I'm buying and selling as we all watch the Fed and what other central banks are doing.

The best way to take advantage right now is to buy the PowerShares DB U.S. Dollar Index (NYSE Arca: UUP). I like buying UUP down to $23 and holding it as a hedge against other currencies falling.

I'll have more trading ideas for you next week.