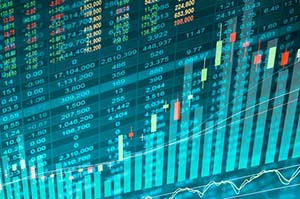 It was another rough day for the Dow Jones Industrial Average as geopolitical concerns about Europe's economy and domestic worries about terrorism dominated headlines.

The flight to safety accelerated today with the Japanese yen hitting a three-year high against the euro, while major European markets slumped sharply on the day. And although these were the headlines that dominated the day, the major media outlets missed one critical takeaway for their audience: how to profit.

Here's what you need to know about the markets on June 14, 2016, and how you can profit from the ongoing jitters felt from the Brexit.

German bonds have fallen below 0% for the first time in history, an unnerving sign for the European economy as the Brexit vote approaches.

Financial stocks took another punch today as no one anticipates that the U.S. Federal Reserve will raise interest rates during its monetary policy meeting that started today. Fed Chair Janet Yellen said last week that the ongoing drama surrounding the United Kingdom's potential departure from the European Union is weighing on the sentiment of central bankers. Here's what investors must know about the Brexit that the mainstream media is missing.

Market expectations for a rate hike have plunged in recent weeks. According to CME FedWatch, the probability of a rate hike in July is roughly 18%, while the probability in September sits at 29%. Investors are now fearing that if the Fed takes any action at all this year, we could see a stock market crash.

Wells Fargo Co. (NYSE: WFC) and JPMorgan Chase & Co. (NYSE: JPM) were both off more than 1.8% on the day. Meanwhile, Capital One Financial Corp. (NYSE: COF) fell more than 6.1%, pushing into oversold territory.

While gold prices and silver prices have seen strong gains in recent months, there's another commodity that we've rallied behind that continues to see remarkable gains. Bitcoin prices hit a two-year high yesterday thanks to a change in the coding that is expected to impact supply and rising demand from Chinese investors. Bitcoin prices are expected to see even more gains thanks to these factors in the months ahead.

But the biggest company news today came from Microsoft Corp. (Nasdaq: MSFT), which again stole headlines for the second straight day. After yesterday's announcement that it will purchase LinkedIn Corp. (Nasdaq: LNKD) for $26.2 billion, the technology giant unveiled its two newest gaming consoles - codenamed Xbox One S and Xbox One Project Scorpio. Shares of MSFT fell 0.7%.