The now-legendary George Soros made his mark on history by "breaking" the Bank of England and walking away with a cool $1.5 billion as a hard-nosed hedge fund trader back in September 1992.

He did it by shorting the sterling pound in a move that ultimately cost the UK treasury more than £3.4 billion and threw global markets into complete chaos. But that's nothing compared to the situation this time around and the opportunity we have on our hands.

This time, the Bank of England is about to break itself.

Here's how to position your money to take advantage of the situation.

There's Always Profit Potential in Chaos of this Caliber

Chances are good you've heard the term "Brexit" by now.

Brexit is shorthand for a referendum slated for Thursday, June 23, that will decide whether Britain will stay in the EU or make an unceremonious exit – hence the term – Britain + Exit = Brexit.

Those who favor staying argue that doing so gives Britain a big advantage when it comes to things like economic growth and public services, which are paid for largely by trade and export. Those who want to leave argue that the EU has too much control over Britain and that the billions paid each year to secure membership could be better spent at home. The "free movement" of migrants overwhelming the country currently and lack of visas has become a central rally point.

What it really comes down to, though, is something far simpler – whether continued membership at a time when Europe is changing rapidly ensures prosperity or condemns Britain to economic devastation.

Those with plenty to defend – meaning the status quo – have gone bananas, and the headlines reflect the increasingly stark divide.

"Brexit Will Raise Risk of World War" – The Times

"Brexit Would Put a Bomb Under Our Economy" – USA Today

They embody the Total Wealth Principle of Divisiveness that we talked about last week, and that means there's a terrific opportunity at hand.

But it's not on the front page like everybody thinks. To really strike it big, you've got to look at what's on the back page because that's the information that can make you a millionaire. 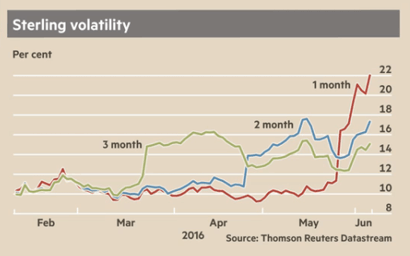 The "back pages" are where you'll find charts like this one.

The critical takeaway here is not the emotional baggage associated with staying, nor with a departure like most people think.

What you need to key in on is that volatility is rising dramatically as the vote draws near.

What this chart is really telling you is that those who have a vested interest in things staying the way they are may actually lose the battle. Put another way, the push to leave is so strong that billions of dollars have already been spent on the assumption that it will happen.

Now, take what you know and play that out logically to find your trade.

If Britain leaves, the pound drops because people are worried about British isolation and all that comes with it. Volatility skyrockets. And, as is the case so often when the stuff hits the proverbial fan, the dollar rises because it's the only currency liquid enough to absorb the risk as traders run for the hills.

Even Janet Yellen can't sugarcoat the possibility. During her speech earlier this week, the U.S. Federal Reserve chair told listeners, "…a UK vote to exit the European Union could have significant economic repercussions."

…no kidding. That's Fedspeak for "buckle up."

As I write this, the pound is sitting nearly 20% lower than its 2014 highs, and the lowest it's been in three weeks.

Should the June 23 referendum lead to Britain's split from the EU, experts (including the head of the Bank of England) are calling for a further 10%, or possibly 15%, drop in the pound.

I think 20% is more likely because leaving the EU is a much bigger deal financially than most people realize, and volatility reflects that even though the headlines don't… yet.

The most defensive "offensive" position is to go long the U.S. dollar with an exchange-traded fund (ETF) like the PowerShares U.S. Dollar Bullish Fund (NYSE Arca: UUP). That way you'll benefit from global traders who seek the relative safety of the dollar should Britain head off on its own even if the pound doesn't move all that much itself.

The U.S. dollar has the added benefit of being the go-to for other currencies that will weaken at the same time, so it's really the choice to play a knee-jerk reaction that will be global in nature, even though it's Britain that we're focused on today.

If you want more direct exposure to the British pound, consider buying the Short GBP Long USD (LON: SGBP). It's traded on the London Exchange, so you'll need to check with your broker for access. This way you'll benefit from a potential breakdown in the pound itself specifically as it trades against the U.S. dollar.

More advanced traders and investors could also consider everything from options to futures, but those are beyond the scope of today's article, so we'll cover 'em another time.

As always, both of these trades are speculative in nature, so you'll want to keep risk small by limiting the capital you place at work.

While that varies by investor risk tolerance and objectives, a good rule of thumb is to limit a speculative trade like this one to 2% of overall capital because doing so gives you plenty of staying power.

Editor's Note: Getting ahead of a whole nation's currency woes can be extremely profitable, as Keith has shown his readers time and again. But there's a "rumor" that several widely respected research firms have already picked up on and published in reports. The $95 million sector that's forecast to grow to $17 billion won't stay a secret much longer – and Keith tells Total Wealth members how to get ahead of this "Unstoppable Trend" in his free special report. To access the full report, including ticker symbol for the company set to conquer the rise of human augmentation, sign up for Total Wealth here – it's free!

What nobody is talking about here is the 7.5Million immigrants that France and Germany have lined up to flood Britain immediately after the vote–if the people don't stand up and say "Out".
Even as the Europeans watch us send thousands of Rumanians murderers, rapists, thieves, who return the next day because Germany and France want to bring Britain to her knees.
They couldn't beat us on battlefield in 2 world wars. Now they'll do it, if we stay in, by taking away our rights in the courts, our forces by incorporating them in EU Forces, our social services which are collapsing, (British People cannot get into hospitals because these scum are given priority.)
No–the Brits can't be so stupid as to stay in. If they get out, then they can send millions of illegal immigrants back home. We can't let them stay, not because of racism but because the EU have so taxed Britain to death. From the day we entered we were screwed, farming, car plants, the Law which they say is more important than British Law–That comes from an Estonian, Latvian, and one other who is so important that I can't remember his name. They took away Britain's right to Rule in our own country and say who could and could not come into Britain. Even better just last week an illegal immigrant can't be sent back to Senegal because her son was born in Britain. The fact that she is a major criminal doesn't matter.
Get'em out and send them home before there's real trouble.

Keith, I'd like to hear what you think. I'm a Vietnam Vet, and now I got a guy that I voted for that is playing with millions of lives. And the exact same thing that I went to war for, is now being taken away. I'm not
Drinking the kool aid, I've gone through some of the most horrific pain known to man. Physical pain, with hands together and
Tears flowing, I begged for Meds to help with the pain. I can't fund an option account.
That had nothing to do with the war, it was a nerve disease that came upon me several
Yrs. ago. It's like having your teeth drilled
With no Novocaine, constantly, 24/7, all
Throughout your body. And now that I've prayed, another man was made, and he's a
Man that will run through the streets with a
Sword by his side, for He will not forget what he Fought for, and neither will they!
Never have I had help, except for the ones
That have gone through what I have, and I
Appreciate you Keith, for helping me when you can!

Thank you for your post – I am deeply humbled. It is you I should and will be thanking…for your service, for your courage and for your selflessness.

I share your sentiment about what's happening now. Sadly, many of the leaders we have in office today appear to take for granted elements of our country's DNA that were paid for in blood, sweat and tears.

I will do everything I can to ensure that your trust in me is merited.

With deepest respect and thanks for being part of the Money Morning Family, Keith :-)