According to President Xi Jinping of China, Brexit -- a British exit from the European Union (EU) -- could leave his country stranded from global free trade...

Not only that, China fears a Brexit will grant the United States more free-trade market dominance. 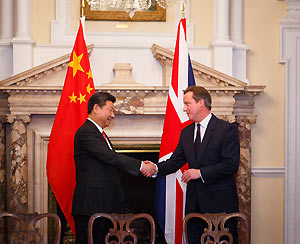 President Xi made no bones about his views on a Brexit when he visited the UK to make $61 billion-worth of trade deals in October 2015. One such transaction included granting China a one-third stake in a French-led project to build a new $34 billion nuclear power station on the remote hillsides of Somerset, England -- a venture that banks on Britain's foothold in the EU.

On the last day of his trip, Xi urged the citizens of Britain to choose to "remain" in the EU when they take to the polls on June 23.

"China hopes to see a prosperous Europe and a united EU," his ministry stated, according to Financial Times, on Oct. 23, 2015, "and hopes Britain, as an important member of the EU, can play an even more positive and constructive role in promoting the deepening development of China-EU ties."

China Likes Trump? One of the most prominent Chinese news outlets is betting Trump will beat out Clinton for the Oval Office. Here's its surprising pro-Trump rationale...

You see, China has been vying for quite some time to use the United Kingdom as a springboard into the whole European market...

Without its EU membership, the UK would lose its attractiveness to these major Chinese corporations.

What's more, according to Xi, a Brexit will have a favorable impact on the United States by reducing the EU's slice of global market share.

You see, the United States is already set to gain $95 billion per year from a free-trade agreement with the EU, which will conclude by the end of this year. The UK would be excluded from this Transatlantic Trade and Investment Partnership (TTIP) if it leaves.

And, in turn, China would lose its biggest trading partner in the west - its essential key to opening the gateway to Europe.

Why Gold Buyers Look So Smart: Over the last few months, billionaires like Stanley Druckenmiller have been loading up on gold. In March, George Soros' fund purchased $124 million in a gold ETF. As an economic collapse looms, find out why gold investors are looking so smart right now...

Wouldn't this be a lethal dart to the major cellphone Giants? Maybe hedge some bets in that direction.