Here's what you need to know about Yellen's interest rate announcement today. And after the rundown, we'll get into the fundamental truth that the Fed and Chair Janet Yellen just keep ignoring...

This Is What the Fed Announced After the FOMC Meeting Today

As widely expected, the U.S. Federal Reserve did not raise interest rates. 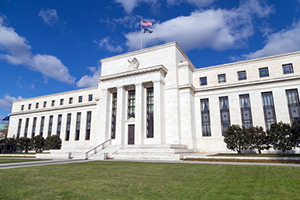 Despite no interest rate action, Janet Yellen and her team of Fed officials gave important economic and rate hike projections for the rest of 2016.

Some key highlights from the announcement include...

Just two weeks ago, the Federal Reserve was poised to hike interest rates at either the June or July FOMC meeting. But the miserable May jobs report showed the worst job market performance since 2010, all but taking a June rate hike off the table. It also made a July rate hike much less likely.

Even if rates are raised at the July Fed meeting, Money Morning Global Credit Strategist Michael E. Lewitt said it doesn't matter what the Fed does. He believes Yellen and her board of officials waited too long to hike rates.

And this inaction has brought us to the precipice of another economic recession...

Lewitt said the Fed should have started seriously talking about and lifting rates two years ago. And he's quick to add that they shouldn't do it now.

According to Lewitt, policymakers have now lost the opportunity to raise rates. In fact, the U.S. central bank committee has discussed using negative rates, which sounded alarms.

You see, the U.S. economy is still recovering from the 2008 financial crisis and talks have surfaced about a new recession.

And corporate profits continue to fall. The estimated earnings decline for the S&P 500 Index in Q2 2016 is 4.8%, according to FactSet. If the broad-based index reports an earnings decline in the second quarter, it will mark the first time the index has recorded five straight quarters of year-over-year (YOY) declines in earnings since Q3 2008 through Q3 2009.

Trade and demand in the United States are also weak. Manufacturing is hovering just above recession levels.

And the situation globally is even worse. Trade is crumpling, manufacturing is in recession, and demand for goods and services is dwindling.

"Global trade is at its second-lowest level since 1958, and is falling in both dollar and local currency terms," Lewitt explained.

Additionally, delinquency rates on auto and student loans are rising. Low commodity prices, meanwhile, are causing rising delinquency rates on agricultural loans. Over 70 oil and gas companies have already filed for bankruptcy and more are expected. Delinquencies on business loans are also accelerating. And the default rate in the high-yield bond market is spiking.

And don't let the current 4.7% unemployment rate fool you.

"That's significant," Lewitt adds. "This means the Fed may be about to embark on a tightening cycle with the employment-to-population ratio at its lowest level in decades. It has never made such a move before with this ratio below 80%."

While the Fed appears more dovish, raising rates is still the plan. Stay tuned to Money Morning for continued coverage of the FOMC meetings in 2016.