Here in the United States, a wave of popular discontent with the powers-that-be has resulted in growing support for Donald Trump, Bernie Sanders, and other "anti-establishment" politicians.

In London, similar dissatisfaction is increasingly pointed at the European Union…

And the current British Prime Minister, David Cameron, may have significantly misread the political climate and put his newly-won parliamentary majority in jeopardy. The upcoming referendum on whether the UK should stay in the EU or leave, to be held on June 23, is going against him.

But politics isn't the only thing being rocked…

The debate over whether the British should exit the EU (called "Brexit") is also impacting the price of oil and the prospects for a wide range of energy companies.

And if the vote turns into a Brexit victory, the repercussions for the markets will be even greater.

Only one thing is for sure… a vote to leave the EU will create one clear winner, much closer to home than you might think.

British Markets Are Down on Brexit Uncertainty 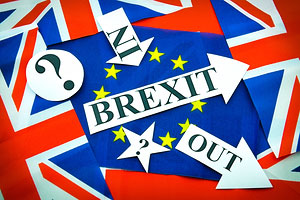 Until the actual vote happens on June 23, the chance that the UK will leave the EU – against the strenuous opposition of David Cameron and each of his last four predecessors – is going to be monopolizing global investor attention.

Brexit began as a political gambit, largely regarded as a maneuver with little chance of success. Not anymore. All the opinion polls are now showing the "leave" camp ahead, with some showing an expanded support level approaching (and in one case exceeding) 10%.

This is no longer a mere political daydream, but a live possibility.

The London Stock Exchange (LSE) has been reeling for days, and is down this morning (as I write) another 1.4%. This follows on a slide that began in earnest last Thursday – when people in "The City" (London's financial center) began reading the tea leaves seriously.

As of 10 a.m. EDT Tuesday morning, the LSE had lost some 7% in less than three trading sessions.

Now, English opinion surveys are notoriously inaccurate when it comes to elections. They consistently underestimate the aggregate strength of undecided voters. Normally, these folks disproportionately end up voting for the status quo.

That's a built-in benefit for those in power.

But this time is different…

Support for the Brexit Camp Is Increasing

We're not dealing with a parliamentary election where control of Westminster is the target. Instead, the vote over Brexit involves a wide variety of issues and motivations, including everything from nostalgia for the bygone days of the British Empire to festering distrust of anything on the other side of the Channel.

Rupert Murdoch's The Sun, Britain's largest newspaper in daily circulation, added fuel to the fire Tuesday morning with a front page headline blaring "BeLEAVE in Britain." The combination of national pride and an ongoing frustration with Pan-European politics in Brussels is coalescing into a move that may rock geopolitics.

The UK has never been a member of the "eurozone," preferring instead to retain its separate currency. Much of the thinking on this issue surrounded English sterling occupying a familiar position as a primary balancing currency.

The deeper issue, however, has always been a deeply ingrained insistence to preserve sovereignty in the face of expanding European consolidation.

And Brexit is now laying all of this on the table.

The nationalistic desire to preserve the UK, the underlying reason for the recent defeat of the Scottish move for independence, is now working against the attempt to keep the country in the European Union.

And against this backdrop, the energy sector is feeling the pressure…

A Brexit Will Push Oil Prices Down – for Now

One would expect that Brent would have the greatest exposure as the Brexit vote approaches. And that, combined with an increasing weakness in the pound's exchange rate against the dollar, makes any energy moves in London for the next week highly volatile.

But with most oil trades worldwide denominated in U.S. dollars, it's the exchange-rate factor that will have the greatest impact. As the value of European currencies (the pound, euro, Swiss franc) decline against the dollar, it costs more for Europe to buy oil, as it requires more of their currency to "buy" the dollars necessary for the transaction.

In the absence of a massive injection of new global demand for oil, that will act to depress the price of crude.

And, of course, there's the "profit" factor…

The U.S. Market Will Look Like a Safe Haven

The oil market has just come out of a nice move up. Through close at this time last week, WTI had risen 14.7% for the month, while Brent had added 15.3%. A leveling off was going to take place anyway.

This profit-taking was already underway, a guarantee for a very short-term decline, when the serious Brexit concerns emerged.

The ripples from the British referendum will continue for the next week as commentators attempt to glean each sliver of insight out of the tide of conjecture circling about Brexit.

Those who choose to approach this analytically (less waving of the Union Jack, more concern over what a Brexit would actually mean for markets) point toward the factors that would immediately be complicated by Britain leaving the EU, including investment, banking, business, finance, and import/export ties.

Surveys have emerged cataloging the number of British jobs that could be lost from a Brexit, along with the subsidiaries of European companies inside the UK whose legal status would be in limbo. Uncertainty would reign, not to mention the possible knock-on effect of a further erosion in the fabric of European integration.

The short story is this: A Brexit vote next Thursday moves the global markets into uncharted territory.

But don't worry. After a short period of instability, there will be a very clear result from the UK moving out of the EU…

Everybody will be looking to the U.S. market as a safe haven.

And I will have several moves in store for you to profit from the bedlam that will result.

Five Reasons Why This Oil Price Dip Won't Last: After an incredible run, crude's given up some gains. But make no mistake: The weakness in oil that started in mid-2014 is drawing to a close, and there are five reasons why the latest price dip won't last – and why they'll soon resume their rise…

A perfect storm could be coming:

Low rig count coupled with ~70% "cannibalism" rate, rapidly declining oil production, iea estimates of 1.8MM bopd demand increase this year and the inevitable decline of the dollar = $70 oil by 1st quarter 2017 with a spike in oil prices reaching well over $100 per barrel by 2018.