What's worrisome is that all-time high increasingly looks like the summit of Everest.

Just getting to basecamp at 18,000 is proving tough enough for stocks.

Slip-sliding back from that psychological and technical resistance level is freaking out some investors, which makes an ascent on the all-time highs much more difficult.

But the Nasdaq Composite is much lower down the slope, about 7.7% from its peak.

You don't have to be a mountain climber to get the analogy – everyone knows not all climbers make it to the top of Everest… and an increasing number in the last few years didn't make it down alive.

Here's what you need to know to not lose your footing – or get crushed by the weight of what's bearing down on stocks globally.

First, there are three things standing between us and 18,000… 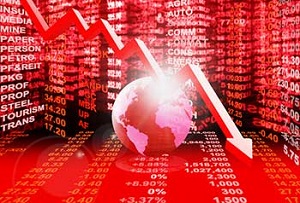 On June 23, 2016, the British will vote on whether they want to exit (hence the "Brexit" portmanteau) the European Union.

What's upsetting European equities, which held up reasonably well until last week, are the great unknowns attendant to Britain actually exiting if the referendum passes.

Over the past five days, not including today's bounce, European stocks are down 7%.

European banks are down 10% over the same period.

In short, if Britain exits the Union, they won't be contributors to bailing out the floundering EU countries who have been relying on the whole group ponying up to carry weaker states through crisis after crisis.

If the Brits exit, that's one big pot of money that's not going to be tapped to back bailouts and, more importantly, the European Central Bank's mad stimulus spending.

The Brits leaving will send shockwaves throughout Europe and the world and the prospect of other countries not wanting to get left holding the bag of obligations for carrying failed economies like Greece's and slipping economies like Italy's, could, and very likely will, spur exit votes elsewhere within the Union.

In other words, the Brits exiting could be the beginning of the end of the EU as we know it.

A Massive Flight to Quality

That's freaking out everyone, and rightfully so. The upcoming Brexit vote is like the top of a mountain about to blow off, if it happens, so investors are clamoring for safety.

Ten-year government bonds in the UK, Germany, Switzerland, and Japan all hit all-time highs in terms of price this week, which means all-time lows in terms of yields.

German 10-year yields turned negative for the first time in history yesterday and are hovering on the zero-rate yield line today.

The only thing to possess investors to accept negative yields on government bonds – for 10 years, mind you – is total fear. Investors would rather lose a little money and get their principal back than risk losing principal parking their money anywhere else these days.

This week, the world saw more than $10 trillion of government bonds yielding less than zero. That's a staggering amount of money invested at a guaranteed loss, unless of course yields go much deeper into negative territory, giving investors a capital gain on those negative yielding bonds.

It's crazy, but this is the global reality today.

Slowing growth is the next big worry facing markets.

After everything central banks have done to stimulate economic growth (at least according to what they want us to believe they're doing), the fact that global economies are backsliding down the slippery slope of growth, back into some deflationary shadows, is scaring investors.

Could it be that the emperors, all of them, have no clothes?

And if that's the case, what will equities do?

And then there's China, always lurking in the shadows.

All the world knows is that China's debt burden is enough to sink the entire world into a depression if small defaults cascade out of control and investors realize the only hope is another central bank emperor being called up to fight what's now looking like a losing battle.

Those are the front and center reasons equity markets have been so soft.

That's why we got to 18,000 basecamp on the Dow and couldn't stay there long enough to pitch a tent. It's just too cold up here near record highs.

For the path higher to be cleared, a lot of debris has to be moved out of investors' way, and that's not likely to happen soon.

Trying to fight the frost over equities right now is like trying to ascend Everest without oxygen. It can be done, but why try if you could die in the process?

Now's not the time to roll the dice that the clouds will lift and we can all summit every benchmark to new highs. That time will surely come. Maybe even sooner than we think.

But I'm a defensive player. I always live to fight another day. That's why I'm only cherry-picking some speculative upside plays and using super-tight stops, and I am putting on more and more downside plays.

Why the Brexit Could Be the End of Central Banks: Brexit anxiety has been driving market volatility for weeks, but no one's talking about the most frightening potential outcome. Namely, what will come of the European Central Bank. This could be the ultimate black swan…