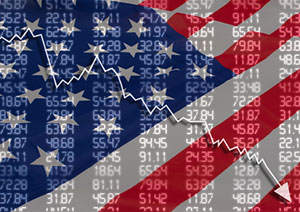 Dow Jones Industrial Average News 6/16/2016: The U.S. economy is again facing lower growth expectations, setting off more concerns about the health of the global economy ahead of next week's critical "Brexit" vote.

Dow Jones futures projected a 65-point decline after the Federal Reserve, the Bank of England, and the Bank of Japan held interest rates in place. The BOJ also announced that it doesn't plan to pump additional stimulus dollars into the economy, a decision that pushed the Yen higher against the U.S. dollar.

Here's a breakdown of other reasons why the Dow is pushing lower this morning.

First up, Federal Reserve Chair Janet Yellen said on Wednesday that ongoing geopolitical challenges like the possible Brexit could hinder economic growth and prevent future interest-rate increases. Central banks around the world are taking a cautious approach to the Brexit.

As a reminder, on June 23, voters from the United Kingdom will vote on whether or not they will begin the process of departing the European Union, which is the world's largest economic bloc. With polls indicating that the vote could come down to the wire – and that a rising number of British voters are planning on voting in favor of a departure from the E.U. – traders are realizing the economic calamity that could soon follow. But despite all the short-term concerns, Money Morning Global Credit Strategist Michael Lewitt says that an exit from the EU could be a great thing for the markets over the long term. Here's why.

On the deal front, Envision Healthcare Holdings Inc. (Nasdaq: EVHC) stock fell 7.4% on news that it will merge with Amsurg Corp. (Nasdaq: AMSG). The deal will create a massive physician services company with a combined value of approximately $15 billion.