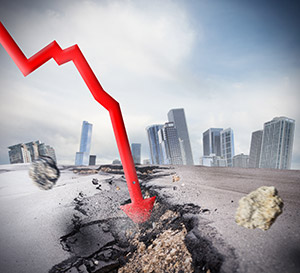 The Bank of Japan (BOJ) decided to leave its monetary policies unchanged today (Thursday), creating yet another trigger for a 2016 stock market crash.

Analysts weren't surprised by the BOJ's move, but it still was unwelcomed news. The S&P 500, Dow Jones Industrial Average, and Nasdaq were all down in intraday trading today.

The economic policies in Japan may just seem like a problem abroad, but Japan is the world's third-largest economy. Anything that happens to Japan's economy will have far-reaching consequences.

And because of Japan's economic policies, and others like it, we are staring directly at a potential 2016 stock market crash. But there are always ways to make money and protect your investments during economic uncertainty.

In fact, we have one must-own investment to share with you today.

But first, here's why Japan's current monetary policy is so dangerous for the global markets.

When more money is lent to businesses and individuals, more money will supposedly be spent.

You see, Japan is desperate to improve its economy…

While the concept of negative interest rates has been around since the 19th century, the long-term ramifications are still being ignored.

Another problem is banks absorbing the fees and not passing them on to the customer. This could cut into the bank's revenue. And with less revenue, bank stocks could plummet.

Combined with volatile oil prices, poor job growth within the United States, and the upcoming Brexit vote, the odds of a stock market crash or stock market correction are growing.

But there is one simple investment to make that can protect your money, and even help you profit, during a stock market crash…

Ahead of the 2016 Stock Market Crash, Make This One Simple Investment

Gold prices are soaring because the metal is a "safe haven" for investors during times of economic crisis. And investors have been racing to add the precious metal to their portfolio since the end of 2015.

For Q1 2016, the demand for gold increased by 21% year over year, according to the World Gold Council.

And the demand isn't just for physical bullion…

Billionaire investors are also protecting their portfolios with gold exposure. Stanley Druckenmiller, who runs Duquesne Capital Management, said in May that his largest currency allocation right now is in gold.

George Soros, who famously made $1.5 billion in 1992 shorting the Bank of England, is even more bullish on gold than Druckenmiller. Soro's fund cut 37% of its U.S. stock holdings in Q1. His fund then purchased $264 million worth of shares in Barrick Gold Corp. (NYSE: ABX), the world's largest gold miner.

With the triggers for a stock market crash still present, gold will continue to be in high demand.

The Bottom Line: The Bank of Japan relying on negative interest rates to bolster its economy is a trigger for a stock market crash. And because of uncertainty across the globe, the price of gold has climbed 23% since the beginning of the year. An ounce of gold is trading at its highest levels since 2014, and the precious metal is one of the simplest yet safest ways to protect your portfolio…

Top Tips for Buying Gold in 2016: If it isn't, buying gold should be on the top of your "to do" list. Gold is not only a great way to protect your investments, but prices for the precious metal are skyrocketing at levels we haven't seen since 2014. These are the top tips on buying gold for 2016 every investor needs to know about…