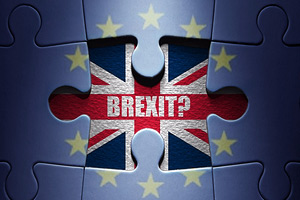 Many economists believe if the Brexit referendum passes, then other countries could leave the European Union, too.

No state has ever left the EU – an economic bloc of 28 countries – since its creation in 1993. That's why the Brexit referendum is such a big deal.

It could cause a domino effect of more "exit" referendums from other member states, which would threaten the EU's sovereignty.

There are three countries in particular that are most likely to leave the EU after Britain. These countries benefit least from their membership.

But before we take a look at these three countries, let's talk about the reasons behind the Brexit vote and its current status…

The UK Prime Minister David Cameron is largely credited for the Brexit referendum – or the vote to exit the European Union. Although he personally supports Britain remaining in the EU, he promised in 2013 to hold a referendum to remain in or leave the EU if Conservatives won the 2015 election, according to the Financial Times.

The most current poll, published by Ipsos MORI poll on June 16 — exactly one week ahead of the vote — shows that the majority of Brits want Brexit:

The poll follows another from The Times just two days before in which the "leave" supporters gained the majority for the first time.

Any country is allowed to leave the EU, as permitted under Article 50 of the Treaty on European Union. But it's not an easy process. For Britain, it could take several years if Brexit passes.

And for these other three member states, leaving the EU would be equally difficult.

But to them, the trouble might be worth it…

A successful Brexit could strengthen anti-EU populist parties in the Netherlands – a country with strong ties to Britain. Geert Wilders, a member of the Dutch anti-Muslim and anti-EU Freedom Party, is already on a stable path to winning 42 of the Dutch parliament's 150 seats in 2017. He said that Brexit would make it easier for other member countries to make the same decision, according to The Guardian.

A recent opinion poll in the Netherlands showed the majority of voters (53%) want an in/out EU referendum vote, according to the Express. And only 1% more of voters want to remain in the EU than those who want to leave the economic bloc. A shift in favor of the Netherlands exiting the EU could easily happen, as the poll also showed 13% said they "didn't know" yet.

No. 2. The Czech Republic

The Czech Republic's Prime Minister, Bohuslav Sobotka, cautioned recently that if the Brexit referendum passes, than a "Czexit" could follow, according to the Express. Sobotka also said a Czexit could lead to an economic downturn and return the country to Russia's sphere of influence.

But many Czech people were upset last year when Brussels – the de facto capital of the EU – forced the Czech Republic to take in a quota of Syrian migrants. Like the Netherlands, a Czexit would allow the country to set its own immigration policy.

In October 2015, a poll conducted among Czech voters showed that three-fifths of Czech voters were unhappy with EU membership, while 62% said they would vote in favor of Czexit in a referendum, according to the Express.

Marie Le Pen's Front National Party is poised to reach the second round of the 2017 presidential poll in France. The Front National is a leading voice of Euro-skepticism, and has long said it would hold an EU referendum if it took power, according to the Guardian.

Along with Germany, France is one of the key member states in the EU. Its struggling economy and migrant issues, however, have fueled concerns about whether it's beneficial for the country to stay in the economic bloc.

In a March poll, more than 50% of French voters want their own in/out EU referendum, according to the Express. Front National leader Le Pen said the poll's results were "extremely encouraging."

The Brexit Vote Could Push the Price of Gold to $1,400 an Ounce: Is the Brexit vote on June 23 the next big catalyst for climbing gold prices? Some analysts believe so, thinking gold could trade for $1,400 an ounce…

Now that Great Britain has voted, what will be the effects on the price of oil? WTI fell modestly today, presumably due to the loss in value of the pound vis a vis the US dollar. But beyond that, will oil be otherwise affected? And with a weaker pound, might GB's demand necessarily be lessened? And if Britain's domino is followed by others, say France, the Netherlands and others, might this have an effect on the Saudis present strategy? Or Russia's?

Brexit is the canary in the tunnel. It's telling us that nationalism and independence is a natural part of our being. Each one of the Euro nations has its own language, customs and culture. History will record, "the euro never had a chance." Given the varying degrees of economic strength among the member nations, the Euro Zone lacks unity of purpose and is impractical to manage mainly due to the different cultures and past fiscal habits of each country. In effect the economically stronger countries had too much to lose when they accepted countries that were poor credit risks at the time of their entry into the zone, especially those whose financial history is one of negligence.

For it to work, each country must relinquish country nationalism for European economic and political unity. Europeans generally understand this, but culturally, they object. They fear that individual cultures will disappear, to be known only through historical anecdotes. One thing is certain, you cannot undo hundreds of years of nationalism overnight and expect immediate loyalty to the new governorship the next day. This will prove to be correct in coming weeks.

This should have been strictly an economic venture and not a geographical / political one. It makes great sense economically, if each country pulls its own weight, but culturally–no. After all, each nation is proud of its unique language and culture. I foresee a break up of the euro zone, starting with Holland. It makes good sense to do so. The people of that country should be the ones to determine what their immigration laws should be. It is, after all, their country and not Brussels or the Euro's. Face it, the euro was established first for economic reasons. Keep it that way. Good luck, Europe!

Yes, the Syrian and the ISIS crisis has created a worldwide mess. Perhaps those Middle Easterners should house their own brethren. We must get rid of our guilt complex, help where we can, but take a moment to reconsider taking on problems that will become to big for us to fix or handle following present policies.

We're beginning to see a lot of dying canaries and that tells us something's got to change. Until we really know what that is, stop the presses and quit taking on more than we can handle. The British have figured that out and have taken the first step. It's up to us and others to follow.

I agree I don't see where any of the countries has resources for the refugees. We need to take care of our own people 1st before we go try and save the world