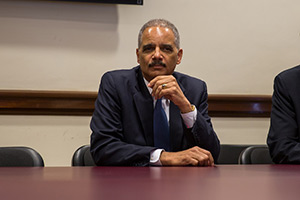 Former U.S. attorney general Eric Holder has been going to bat for the ride-hailing service Uber in recent weeks.

Currently, the massive multibillion-dollar company is battling simultaneous fights in New Jersey, Georgia, and Illinois over what types of background checks it should use when hiring drivers.

You see, city councils in these states are weighing in on legislation that would require fingerprint background checks for Uber employees.

Taxi and limousine drivers, who for decades have been subjected to these very checks upon hire, are lobbying for a policy change to level the playing field.

Uber itself decries the requirement as unnecessary. It argues that fingerprints should be used for the sole purpose of police identification and record-keeping.

And while Eric Holder agrees with Uber's sentiment, he has now taken his qualms a step further…

Holder said that such measures could have a disproportionately negative impact on black and Hispanic men looking for work because they're more likely to have been arrested when they were young. Therefore, their fingerprints would be on file.

Furthermore, Holder said there are deficiencies in the FBI database (which, in and of itself, is concerning) such that just because an individual's prints are on file doesn't mean he has been convicted or arrested for a crime. But such a discovery on the employer's part could result in someone not being hired.

While his argument does shed light on overly rigorous hiring practices, there's more to Holder's advocacy on behalf of Uber.

You see, Holder is funded by the company — you just have to follow the money…

Holder is a partner at the law firm Covington & Burling. And Uber is a client.

A spokesman for Covington admitted to The Hill yesterday that Uber is indeed a client of the firm, which means that Holder is on its payroll…

So naturally Holder is invested in Uber's success.

And former strategist for President Barack Obama – David Plouffe – is now a senior adviser to the company, as well as a member of its board.

"Several former White House staff members have decamped to the company since Plouffe was hired," reported The Hill yesterday.

It seems that one of Uber's hiring practices consists of taking on past White House employees to put their lobbying political skills back to work.

All Hail, POTUS: President Obama is the most controversial executive action user in history. In fact, he governs with his pen so much that he gained the nickname "Emperor Obama" behind White House doors. Here's a list of the "decrees" the emperor's made over his last eight years of reign…