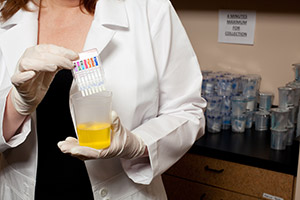 Last year, Florida taxpayers unwittingly coughed up than $1.5 million in legal fees – most of which went to civil-rights lawyers – because of Gov. Rick Scott's push to force welfare applicants to undergo mandatory drug tests.

Ultimately, Scott abandoned his expensive, four-year fight when a federal appeals court ruled that suspicion-less drug testing of applicants in the Temporary Assistance for Needy Families (TANF), or welfare, program was an unconstitutional violation of Fourth Amendment rights.

But that wasn't the case in Wisconsin, where on Nov. 9, 2015, a state law went into effect that forced applicants for TANF to answer questions about their own drug use. Depending on their answers, they'd be required to submit to an immediate drug test afterward.

In fact, at least 15 states have passed legislation requiring mandatory drug screening for public assistance applicants since 2011. Some require all applicants to be tested, while others specify a reasonable suspicion that a person is engaging in illegal drug activity must be present.

Milwaukee congresswoman Gwen Moore, however, takes issue with these laws…

And today she'll be the first Washington policymaker to propose mandatory illicit substance-use screening of a different sort.

She wants to "drug test the rich."

Moore will introduce her "Top 1% Accountability Act" today – a bill that would require taxpayers reporting itemized deductions of more than $150,000 (a.k.a. "the Rich") to either submit to the IRS a clear drug test, or accept the much lower standard deduction when filing tax returns.

These Six Retail Companies Are Toast: Aeropostale's bankruptcy and Macy's 15% post-earnings plummet are just the latest indications that retail is in crisis. As the sector bleeds out, these six companies will be the first to go…

"Though most people think about their tax deductions and credits – particularly those such as mortgage interest or charitable deductions – as part of the government's revenue system," reported The Guardian on Moore's legislation yesterday, "they are considered 'expenditures' within the federal government, as they subtract from government revenue and are often instituted to subsidize, reward or encourage taxpayer behaviors."

But those who are actually eligible for far more tax credits than the average person – individuals we'd refer to as "the one percent" – don't consider deductions as an appropriation comparable to those given to poor people in the form of benefits.

Moore believes this kind of thinking needs to change. "The benefits we give to poor people are so limited compared to what we give to the top one percent," she told The Guardian. "It's a drop in the bucket."

Seven of the 15 states that actively drug test welfare applicants – states that adopted legislation to do so prior to the year 2014 – found that drug use among recipients was far below the national average – on a ratio of 1% to an overall 9%.

These seven states spent a combined 1 million dollars in taxpayer funds for the screening process, which means there was little, if any, cost saving accomplished by their programs. What the states didn't pay out in subsidized assistance, they spent in testing applicants.

To this, Gwen Moore told The Guardian, "We might really save some money by drug testing folks on Wall Street, who might have a little cocaine before they get their deal done."

Five Reasons Why This Oil Price Dip Won't Last: After an incredible run, crude's given up some gains. But make no mistake: The weakness in oil that started in mid-2014 is drawing to a close, and there are five reasons why the latest price dip won't last – and why they'll soon resume their rise…