But is this a sustained rally or just a short-term surge for the SWHC stock price?

Before we get into our outlook for Smith & Wesson stock in 2016, here's a closer look at today's fiscal Q4 results… 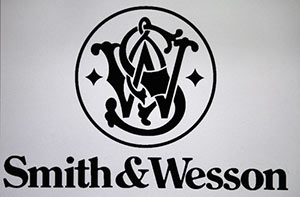 Both helped Smith & Wesson significantly boost its gross margin, which came in at 41.6%. That was up from 37.1% last year.

Looking ahead, the maker of pistols, handguns, and revolvers expects Q1 earnings between $0.49 and $0.53 per share. That would outpace analyst estimates of just $0.37. The company also expects Q1 revenue between $190 million and $200 million. Analysts have a target of $161 million.

The company's full-year guidance was also optimistic. The company projected above-consensus earnings between $1.83 and $1.93 per share on revenue between $740 million and $760 million.

The SWHC stock price in 2016 has significantly outpaced the broader market. This year, the SWHC stock price is up 6.5%, compared to 1.4% for the Dow. A good part of the gains is because of some high-profile mass shootings, including December's San Bernardino, Calif., shooting that sparked increased calls for gun control.

Shootings such as this week's one in Orlando, Fla., intensify fears of crime, leading some people to buy guns for protection. Others buy them expecting tighter U.S. gun control. Both stoke gun sales and strengthen the investment appeal of gun stocks.

In February, industry rival Sturm Ruger Co. (NYSE: RGR) said it expects a rise in demand for its firearms if a Democrat wins the White House in November and becomes poised to appoint future Supreme Court justices.

Smith & Wesson's revenue forecast did not reflect any potential surge in demand caused by consumers worried about increased gun control.

"We plan our business outlook and set our growth parameters based on our strategic direction, exclusive of any political or election-cycle influences that reside outside of our control," the company said on a conference call.

Whatever the presidential outcome, the case for the SWHC stock price continues to be bullish…

Why the SWHC Stock Price Rally Has Room to Run