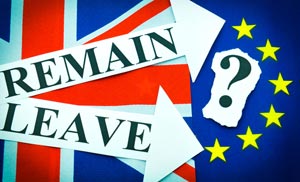 Dow Jones Industrial Average News, 6/21/2016: Markets have moved in tandem with polling sentiment around the possibility that British voters could push England out of the European Union.

That puts the focus on undecided voters. Expect the chatter and campaigning to heat up again on Tuesday as warnings about a potential recession or outright economic collapse are sung from the Brexit's biggest critics.

But the Brexit isn't the only big news happening in the markets this morning.

Dow Jones futures projected a 65-point gain as investors anticipate that the United Kingdom will remain in the European Union. Momentum has swung back in favor of those who wish to remain in the world's largest economic bloc. Economists have warned of a "Black Friday" trading session in the event of an exit. Meanwhile, George Soros said this morning that a Brexit would could cause a significant drop in the pound and make the British poor. Here's how you should be trading the Brexit.

Crude oil prices slipped as traders took gains off the table ahead of Thursday's Brexit vote. Yesterday's trading session saw modest gains, but caution has set in. WTI crude was off 1.6% this morning, while Brent crude was down 1.7%.

The U.S. Federal Reserve is in focus today as Fed Chair Janet Yellen visits Congress. Yellen will be testifying before the Senate Banking Committee and discussing the Federal Reserve's proposed timing for its next rate increase. Following the Fed's decision to not raise interest rates in June due to Brexit and other macro-economic fears, expect Congress to press Yellen on the state of the U.S. economy. Congress will want to know more about slow April and May job growth, as well as the Fed's monetary policy decisions. Don't expect any surprises, as Yellen has dropped her hawkish tone in recent weeks. One thing is for certain: The Brexit could fuel an end to the jobs of central bankers like Janet Yellen.

The Ultimate Must-Have Investment: Water is going to be the single most important investment of this century. It's likely to deliver big returns to investors who make the right moves, like the ones in this report. Read More…
Join the conversation. Click here to jump to comments…