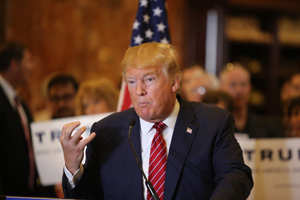 Federal Election Commission (FEC) disclosures released yesterday show Trump's campaign raised just over $3 million last month -- $2.2 million (73%) of which he supplied himself. That left the real estate mogul with just $1.3 million of actual donor funds in the bank at the beginning of June.

Meanwhile, Hillary Clinton raked in more than $26 million in May, giving her war chest a grand total of $42 million at the beginning of June. That's 32 times Trump's amount.

But contrary to the message mainstream media is pushing -- that this is evidence the Trump campaign is in dire straits - there is more immediate proof that the real estate mogul is doing just fine.

First, Trump got a late start to fundraising. He self-financed his campaign from June 2015 to May 2016. Upon securing the presumptive nomination on May 24, he finally set up a fundraising operation. Clinton, on the other hand, has been in fundraising mode for her campaign since at least April 2015 - the month she officially announced her bid for the White House.

In May, Trump appointed a finance chief and announced two joint fundraising efforts with the RNC. The FEC's latest data doesn't reflect these more recent efforts. For example, events in Texas last week were co-hosted by Trump and the GOP committee, after which the candidate claimed to have raised between $12 million and $13 million in two days, reported ABC News.

Second, most pro-Trump super PACs were not due to file their financial reports yesterday, having formed recently or having different reporting schedules.

And finally, Trump's simply not worried about it.

"I can win it either way," he said this morning on NBC's "Today" show. "I may be better off winning it the opposite way than the more traditional way."

The traditional way being more help from his own party. While the reality star shrugged off his lack of funds on the network morning show, he did concede that many members of the RNC haven't been very helpful.

"I'm having more difficulty, frankly, with some of the people in the party than the Democrats are having," Trump said.

Brexit - Buy the Rumor, Sell the Fact: In 1992, George Soros broke the Bank of England by shorting the sterling pound. It was a move that made him $1.5 billion. Now, the Bank of England is about to break itself. Before the Brexit vote on June 23, we discovered two ways to profit during the chaos. Here's how...