Late last month, the Apple Inc. (Nasdaq: AAPL) CEO visited the subcontinent as part of a plan to boost sales there.

Practically before his plane landed, though, the cable TV cynics were blabbing about how the trip was merely a "cover" for Apple's share-price struggles and the slowdown in iPhone sales in China.

But really, Cook's "Indian vacation" is emblematic of a much larger story – one that savvy tech investors can use to pile up market-crushing gains.

I'm talking about a new trend in which U.S. tech companies are targeting the world's second-most-populous nation and No. 7 economy with billions in new investment.

And I'm talking about Digital India – the nation's effort to…

After watching those Wall Street "screaming heads" fail to connect the dots, I knew we could use their blind spot to crush the market.

And I've found a little-noticed firm that's best positioned to spearhead growth in this massive market. It's poised to climb 23% in the coming months while paying a 2% dividend. 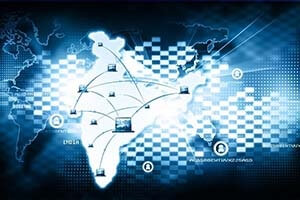 But before I show you how we'll cash in on this tech boom, let's take a look at how India became such a fertile investing area.

The reason is simple. India is adding 6 million new Internet users every month.

I got that tidbit from Jeff Bezos, CEO of Amazon.com Inc. (Nasdaq: AMZN).

Just three years ago, his firm had little presence in India.

Today, Amazon operates 21 fulfillment centers. Plus, Bezos just announced a fresh $3 billion investment in the country because he expects e-commerce sales to increase sharply there. That's on top of the $2 billion he announced in 2014.

Without a doubt, India is the world's most dynamic economy – right now.

In just the past decade, India's economy – now worth $2 trillion – has leapt past the economies of Italy, Brazil, Canada, South Korea, and Russia. A decade from now, India will likely be in the global top five.

Much of that growth is coming from the tech sector. Analysts at McKinsey & Co. have identified a dozen disruptive industries in India that will be worth a combined $1 trillion by 2025. They range from cloud computing to clean energy to advanced genomics.

Ernst & Young's annual survey of global tech spending found that India attracted the third-highest level of foreign investment in the tech sector last year, right behind the United States and the United Kingdom.

Tech CEOs Are "All In"

As India lures a lot of tech investment, it's also becoming a big hub for tech exports. And the United States is its biggest trading partner.

Modi's message hit home with the tech community. He said that his Digital India plan was an "enterprise for transformation, unmatched in human history."

That might sound like typical political hype, but he's likely right – or at least close to it. Any country with 1.3 billion people who are quickly adopting the Internet is likely to have a huge impact on the global tech sector.

His Sept. 26 Digital India speech in San Jose kicked off a major wave of tech investment.

Facebook Inc.'s (Nasdaq: FB) Mark Zuckerberg is way ahead of his peers. The country is already Facebook's second-largest market, though Zuckerberg is aiming higher.

"India is the world's largest democracy; it's one of the biggest countries, where if you really have a mission of connecting every person in the world, you can't do that without helping to connect everyone in India," he said at a town hall-style meeting at the India Institute of Technology Delhi last year.

The Indian IT Pioneer

We want to find the firm that is best positioned to spearhead growth in this massive market.

Infosys was once known mostly as a provider of outsourced tech services. But with each passing year, it has built up a deeper set of tools to offer clients, from consulting to system design to artificial intelligence.

Infosys, headquartered in Bangalore (India's so-called Silicon Plateau), has, since getting started in the early 1980s, been a great partner to global tech firms that need local market expertise or wanted to take advantage of the firm's low-cost outsourcing services.

But as Infosys' skill set and reputation has grown, it's moving well beyond its local partner and outsourcing roots. And it's attracting new clients at a rapid clip.

Back in 2011, Infosys worked with 600 global clients. Five years later, that figure has risen to 1,100. Nearly 400 of them spend more than $100 million every year on the firm's software and services.

Look for Infosys to play an even greater role in the global tech landscape in coming years as it relies on India's education system, which produces roughly 1 million new engineers every year.

Those graduates know where to turn when it's time to start a career. Business Today magazine ranked Infosys as India's most preferred company for employment.

Infosys will surely need their skills. The firm is making a big push into a new division called Digital Services. It's a costly upfront investment as Infosys has to build a deep bench of engineers with master's degrees. Yet Infosys can also charge a lot more for the projects that these staffers can handle.

You can see the early payoff of that shift by a quick glance at the numbers. Sales are likely to grow in the low teens in both 2017 and 2018, thanks to strong demand for Infosys' products in foreign markets and rising investments in India's technology foundation.

The Next Tech Titan

Here in the United States, Infosys isn't a household name like Google or Apple. At least not yet.

But as investors start to focus on the world's fastest-growing economy, they will look for that trend's best player – and one that is rich in profits and cash flow.

With a share price of $18, Infosys has a market value of $41 billion. It has roughly $5 billion in cash on hand, no debt, and pays a dividend with a 2% yield.

This is a stock that will benefit greatly from the country's transformation from emerging economy to one that will live up to Prime Minister Modi's dream of a truly Digital India.

Cash In on the "War Against Sugar" with… a Chocolate Company: The anti-sugar tide is a growing and unstoppable trend – as well as a fantastic moneymaking opportunity. One stock will ride this wave and a trio of growth catalysts to huge profits. And get this – you probably think of it as a chocolate company…