What is Saudi Aramco? That's a question you're going to hear a lot of investors ask over the next two years.

In a nutshell, Saudi Aramco is Saudi Arabia's government-owned oil producer. The company was founded in 1933 and is officially known as the Saudi Arabian Oil Co.

It's also the most important oil company in the history of the energy industry. And it's about to make history in another area of the market in 2017...

What Is Saudi Aramco and Why Should I Care About It? 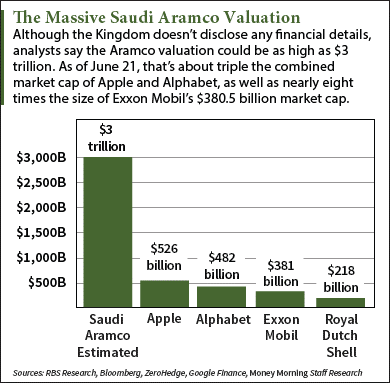 Saudi Aramco is the most valuable company in the world by an outstanding margin.

According to reports by the Saudi Arabian government, Saudi Aramco is estimated to be worth as much as 11.25 trillion Saudi riyals (or roughly $3 trillion). That's about three times the size of the $1.01 trillion combined market cap of Apple Inc. (Nasdaq: AAPL) and Alphabet Inc. (Nasdaq: GOOGL) - the two largest public companies in the world.

The astonishing Saudi Aramco valuation comes from the company's dominance over the global energy market for more than eight decades. The Financial Times reported the company produced an average of 10.2 million barrels per day in 2015. That made up more than 10% of last year's global daily output of 91.7 million barrels, according to the 2015 BP Plc. (NYSE ADR: BP) Statistical Review of World Energy.

The company's huge oil supply has made up 80% of Saudi Arabia's total revenue for decades. But Deputy Crown Price Mohammad bin Salman plans to change his country's energy dependence by pivoting the economy toward non-oil sources of revenue.

And one way he plans to make this historic shift is by offering Saudi Aramco to the public next year...

What Is Saudi Aramco? It's the $150 Billion Sale of the Century

The kingdom will launch a Saudi Aramco IPO sometime in 2017 to raise money and alleviate some of the country's debt.

You see, the 56% crash in crude oil prices since June 2014 has pushed Saudi Arabia's debt levels to dangerous highs. According to ratings agency Standard & Poor's, Saudi debt reached $26.1 billion in 2015 and could more than double that level by the end of this year.

That's why officials told The Economist back in January they were considering a possible Saudi Aramco IPO. Three months later in April, Prince Salman announced his country would move forward with the initial public offering and launch it sometime next year.

The Saudi government plans to sell about 5% of Aramco to the public. That would raise upwards of $150 billion in IPO proceeds. By comparison, the Alibaba IPO only raised $21.8 billion and currently holds the title for the biggest U.S. IPO ever.

Since IPO underwriters usually make 10% to 40% of the proceeds in fees, the lucky investment banks that take the firm public could make at least $1 billion on the deal. The New York Times reports JPMorgan Chase & Co. (NYSE: JPM) and boutique bank M. Klein & Co. are the two banks working on the Saudi Aramco IPO so far.

According to Money Morning Global Energy Strategist Dr. Kent Moors, Saudi Arabia's sale of the company will be unlike anything the country's done before.

"The Aramco IPO signals a big change in the kingdom's strategy," Moors - an energy industry veteran with 40 years of experience advising high-level U.S. and Russian agencies - explained in April. "Saudi Arabia has been reluctant to sell a percentage of its crown jewel company, because doing so requires revealing important information about the country's oil fields that have been held in secrecy until now."

The Bottom Line: Saudi Aramco is one of the most important companies not just in the energy industry, but also in the context of the global economy. Its historically high valuation and colossal influence on the oil market ensure it will become the largest IPO ever. Expect to hear a lot more about the company and its initial public offering as more details develop about the deal over the next year.

Alex McGuire writes about the IPO and oil markets for Money Morning. Follow him on Twitter for the biggest updates on the Saudi Aramco IPO.