Naturally, that crushed the world's dominant resource producers; the top 40 companies saw their market caps shrink by $27 billion in 2015 alone.

All along, these producers have had to clean house, slash spending, reduce headcount, and rationalize every last cent they did spend as production crashed. It was the law of the jungle in action, survival of the fittest. Plenty of producers went straight out of business.

It wasn't easy to watch, and it was even tougher to invest in.

But the cycle is swinging back in a big way, thanks to recuperating demand running up against lean supply. The Bloomberg Commodity Index has halved its bear market losses, gaining 30% since January. Some of its components have come close to doubling, too.

Remarkably, all those gains have come at an insanely low price, relative to other asset classes. And, as you'll see, this particular bull is about much more than simple supply and demand.

Here's my favorite way to get the maximum profit from what's coming next...

There's Broad Support for a Bull

One of the most widely followed commodities indices is the Reuters/Jefferies CRB Index (CRB). The CRB put in a double-bottom early this year and is up 25% since then.

But that's just part of the story. If we look at some of the components of the CRB, we'll see that particular commodities have done even better.

Some of the most consumed agricultural items - soybeans produced for cooking oil and as livestock feed - have soared by 33% and 58%, thanks in part to particularly dry conditions in the United States, coupled with flooding in South America.

Precious metals are ahead nicely too. In what has every marking of decisive bull market action, gold has gained 24%, silver is up 27%, and platinum is ahead by 22%. Of course gold is also a form of currency, which means it's poised to go even higher than other precious metals thanks to interference from the Fed.

In the energy subsector natural gas has jumped 68% from its low, while oil has soared 81%.

Despite these notable gains, it's not just about supply and demand.

So far this year, the dollar has had a rough go. The U.S. Dollar Index peaked near 100 in late January. Since then, it's down 6%.

While that may not sound like much, it's especially significant given that it's the world's de facto reserve currency.

What's more, commodities are all priced in dollars, so a weaker dollar means buyers need more of them if they're looking to buy a given quantity of a commodity.

And that of course helps commodities prices rise.

With the Fed nixing a June rate hike, hesitant to raise rates until after the fall election, and finally admitting the pace of hikes will be slower than expected, the dollar is very likely to struggle going forward and lend some longevity to this bull.

But there's also another driver that could support higher commodities prices: emotion. But it's not quite what you think...

The Thinking on Commodities Has Turned Around

Of course sentiment can have a very powerful impact on prices. We've all heard how fear and greed can push assets to extremes. And commodities are no exception.

Some great work in this area is done by Jason Goepfert's Sentimentrader research service.

The last time Goepfert's indicator rose from excessive pessimism levels to excessive optimism levels, from mid-2010 through mid-2011, the CRB Index surged by 48%.

So here's how you can position yourself to ride the renewed commodities bull market.

14 Commodities Profit Opportunities in One Investment

Thanks to the way the underlying index is constructed, it's likely to easily outperform a more basic index like the CRB.

Besides, it's already lapped stocks on the S&P 500, more than doubling those returns since the start of the year.

From a technical perspective, the USCI is looking strong as well. 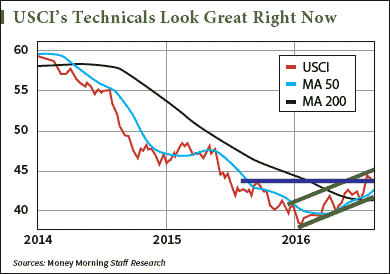 Since early 2016 it's been in a rising channel pattern, and recently surpassed a previous resistance level set back in October.

USCI has just touched the top end of the channel and pulled back. Look for its price to stabilize then likely head higher once again.

That should be your cue to wade in and get in on what could well be the next commodities boom.

This one commodity could go up 300% or more, thanks to its "double life." Gold trades just like silver, platinum, and even copper, but remember - unlike the rest, it's also a form of currency. This makes it absolutely essential for any dollar-bearish market. Click here to get Michael Lewitt's 2016 Gold Profit Playbook and you'll learn his favorite gold plays that you can make right now for protection and profit. You'll also get his Sure Money service at no charge, twice each week.

Looking for higher prices in grains and metals.