The gold price today (Friday, June 24) rocketed past the $1,300 mark after the results of the Brexit vote sent global markets into a wild tailspin.

The results of the UK referendum are now clear – Britain has voted to leave the EU. And while the price of gold is benefiting the most from the controversial decision, markets around the world are in turmoil.

European markets all plunged on the news. The UK's main stock index, the FTSE 100, fell 3.2% on the day, while Germany's and France's main indices were down 6.8% and 8%, respectively. Here in the United States, the Dow Jones Industrial Average is down 2.8%.

It's clear the Brexit will be all everybody talks about in the coming weeks. Today, I'm going to discuss where we can expect gold prices to move in the wake of this massive frenzy.

First, here's a recap of the gold price's wild week…

Gold's headwinds blew even stronger the following day. The metal immediately dropped by nearly $20 to $1,271 when markets opened. Gold prices eventually closed at $1,268 and logged a loss of 1.7%.

Wednesday was more of the same, though less dramatic. Gold traded flat throughout the day and closed just 0.2% lower at $1,266.

For comparison, here's how the U.S. Dollar Index (DXY) has been trading this week… 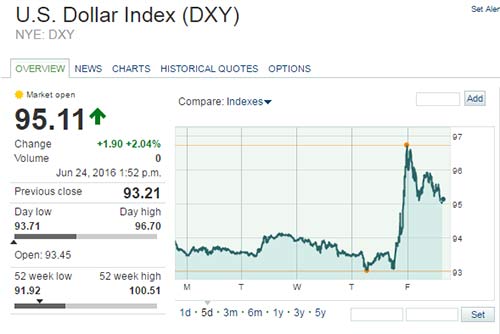 Notice how both the price of gold and the U.S. dollar declined on Wednesday. Remember, this kind of short-term behavior where both move in tandem is not typical.

This pointed toward an easing of fear regarding the likeliness of the Brexit vote producing a win for the "Leave" side.

Yesterday, the polls opened and British citizens voted on whether or not their country would leave the EU. During the day, gold prices trended lower and closed at $1,263.10 for a 0.2% loss. Again, this movement showed how investors were anticipating the country to remain in the bloc.

Then, the UK shocked the world with a Brexit, sending the gold price today to its highest level since 2014.

With today's rally, investors want to know if gold prices will maintain these gains in the coming months.

Despite the Rise in the Gold Price Today, This Is Where It's Headed

With the Brexit vote ending with the "Leave" side winning, I expected gold prices to see a surge. The metal's safe-haven appeal during volatile market conditions send it on a massive rally whenever a geopolitical crisis happens.

But the gold buying will likely start to lose steam and back off within weeks.

I think the reality that it's not actually the end of the world will finally be recognized and the trend of typical summer weakness in gold will return.

Despite all this fear, gold will settle back somewhat, and stocks will regain some ground they lost today. Reality will set in, and the markets will realize that Britain leaving the EU is not as big a deal as the "Remain" side wanted us to believe.

After all, Britain maintained its own currency – the pound sterling – even while being an EU member. That will not change.

Gold's safe-haven quality let the metal rally as expected, and investors who followed our recommendations to stay long on gold had a decent trading day, all things considered.

I just think it's a little overdone and we could well see it back below $1,300 as things settle down.

The Guide to Gold Investing: Buying gold is like having car insurance – it's there just in case of an unforeseen accident. If the markets take a sudden dive, gold is the ultimate safe-haven investment that will protect your portfolio. Here's how you can benefit from gold in 2016…

DearMr. Krauth, The gold- and silver markets are already a long time due to go up. That´s what we all know, however, those markets are manipulated mainly by what a call criminals, mainly in Wall Street Business has nothing to do anymore with the healthy law of "offer and demand". The markets reacted acelerated on the Brexit and went as high as US$ 1337,- t/o. Later the markets settled down but stayed above the $ 1.300,– level and fortunately the manipulators did not have an answer to the reaction of the Brexit. They did not expect it, like everybody else. As long as these criminals donot disappear from the markets but that is a matter which has to be taken care of by the US authorities and I doubt that they will do that. May be if eventually Hillary Clinton becomes the US president. Anyhow I believe that we will see a lot of turbulance in the precious metal markets and other commodities to the upside as the UK is a chaos as well as the EU. The Brexit leaders donot have a plan how to go forward and the EU leaders are so arrogant, e.g. look at the president of the EU commission Junckers, that no decisions are taken or even discussed how the solve the Brexit with the UK in the best possible way. So may opinion is that the goldprice will go direction $ 1,400,– OK I may be wrong. Best regards HdB