Oil Prices After Brexit, Friday, 6/24/16: Both Brent and WTI crude oil prices are being hammered today after the UK shocked global markets by voting to leave the European Union. 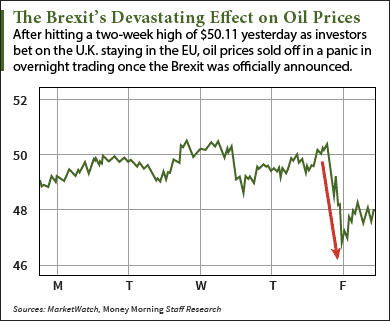 At 9 a.m. today, WTI crude oil prices were down 5% and trading at $47.64 per barrel. The U.S. benchmark took a sharp plunge in overnight trading as results of the UK referendum gradually poured in. Today marks the second day in more than a month that futures for August delivery have traded below $48.

Brent crude oil prices were slightly more volatile this morning. The global benchmark tumbled 5.1% to $48.96 per barrel. Futures for September delivery are now on track for a weekly loss of 4.5%.

Here's why the oil market is plunging today…

Why Oil Prices After Brexit Are in a Free Fall

Yesterday, British citizens went to the polls to answer one question: "Should the UK remain a member of the EU or leave the EU?" The official results show 52% chose to leave while 48% chose to stay. Now, Britain will begin the process of separating itself from the EU, which is expected to happen in 2018.

According to FactSet Research Systems Inc. (NYSE: FDS), the STOXX 600 – the Eurozone's benchmark index – fell 6.8%. The Dow Jones Industrial Average and S&P 500 are down 2.2% and 2.4%, respectively. And the British pound has fallen to its lowest level in 30 years.

As the British pound crashes, European investors are flocking to the U.S. dollar as a safe-haven investment. This has sent the U.S. Dollar Index (DXY) up 2.4% to its highest level since early June. The rising dollar crushed oil prices today since a strong dollar makes dollar-denominated goods like oil more expensive to foreign currency users.

The Brexit is also sending shockwaves through the global political sphere. British Prime Minister David Cameron – who was the face of the "Remain" camp – announced he will resign by October. Meanwhile, Donald Trump visited Scotland today and praised Britain's decision to leave the EU.

Moors – a 40-year veteran of the oil industry who's advised several high-level government energy agencies – says the Brexit is a huge act of political suicide. The move will not only have a lasting negative impact on Britain but also on Europe's status as a global economic force.

But crude oil prices will not see that same fate, and there's one reason why they'll survive Europe's current implosion…

Investors should expect to see more oil price volatility in the near term as the British pound adjusts to the new environment.

You see, international investors don't know what Britain will do next. Since 45% of its exports go to other EU members, Britain's economy could be stuck between a rock and a hard place as the country tries to mend relations with the bloc to keep its export revenue afloat.

That uncertainty means the UK's benchmark FTSE index and British pound could remain volatile in the coming months. As we're seeing today, any sharp decline in the pound means a sharp rise in the dollar, which typically sends crude oil prices lower.

"The pound will linger and have an adverse impact on Brent crude oil prices," Moors said on June 24 after the Brexit vote. "Since most futures contracts are denominated in dollars, the exchange problems will also affect WTI crude oil prices."

But oil prices will rebound following the Brexit for one simple reason – balancing supply and demand.

Supply has steadily declined over the last two years and will continue to do so thanks to the falling rig count. According to Baker Hughes Inc. (NYSE: BHI), the number of active U.S. oil rigs has fallen from a peak of roughly 1,600 in 2014 to 337.

Despite the single-digit rises in the count over the last three weeks, most companies can't afford to keep their rigs online. With crude oil costing under $48 a barrel, these producers can't turn a profit from drilling wells that cost anywhere from $500,000 to $3 million. Most firms can only cover the operational and maintenance costs of these wells when the WTI crude oil price is near $70.

This will urge producers to use old wells that are already in place and offer less output. That can only lead to a gradual drop-off in supply until prices reach about $65, which would justify an increase in production activity.

Meanwhile, demand will steadily rise this year and next. The U.S. Energy Information Administration (EIA) reported global annual oil consumption is expected to rise 1.5% to 95.26 million barrels a day this year. For 2017, it's projected to reach 96.73 million.

These two market forces – along with the balance between "paper" and "wet" barrels of oil – will bring prices higher this year. In fact, Moors predicts WTI crude oil prices to hit $58-$60 this year, while Brent is set to hit $62-$65.

When Cutting Energy Debt Is Actually a Bad Idea: Oil firms are increasingly swapping debt for equity, trying to improve their financial snapshot. But there's a hidden downside that could offset the short-term benefits – and put your portfolio at risk…