A couple of weeks ago, I told you about how the fintech disruptor known as blockchain was already changing the world.

Blockchain and Bitcoin, a cryptocurrency blockchain derivative, are leading-edge fintech disruptors that actually threaten the existence of banks and central banks everywhere.

Even the all-powerful U.S. Federal Reserve.

That's why it's strange that the Fed is now embracing Bitcoin and blockchain, two direct threats to the banks and financial systems it lords over.

On the surface it doesn't make any sense.

But if you dig down just a bit, it makes perfect sense. It's not that they want to embrace the very thing that could bring them down - they have to. Their survival is at stake.

The Fed is being forced to advocate on behalf of two frontal assaults - two world-altering disruptors - to preserve their existence, their control over the American economy, and their global influence.

Blockchain Technology Is Pushing the Fed to the Brink 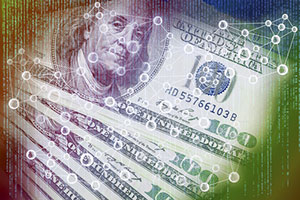 In the old world, a custodian that controls a country's money, which is what the Federal Reserve System is and does, that yields absolute power over the supply of cash and credit, controls interest rates and economic growth, has to have everything flow through a central ledger. That's how they maintain control.

But in the new world of decentralized digitally shared databases existing in the cloud, there is no singular custodian, no central ledger, no economic central planner.

That's what blockchain is, that's what Bitcoin is, and that's where the future lies.

As you know, blockchain is a distributed database across lots of separate computers.

It starts somewhere, from a "block," like a block of gold, or a contract.

Then, as pieces of gold are chipped off the block, or as terms in a contract are triggered, digital records are created noting each "transaction."

Bitcoin is a cryptocurrency on a blockchain. The creator of Bitcoin made a program that embedded bitcoins within its code. People use computers designed to "mine" the code that yields bitcoins, of which there are only a limited number, according to Bitcoin's creator, in order to chip off those bitcoins from the master program code where they reside.

Some people and merchants accept bitcoins as payment for goods and services in lieu of cash or credit, which makes Bitcoin a type of currency, or cryptocurrency.

Every transaction made with Bitcoin is recorded on the decentralized blockchain ledger.

The value of a bitcoin in dollar terms is a function of the market price of what buyers and sellers of bitcoins buy and sell them for.

That's the same way the value of a euro, or a pound sterling, or a yen is valued in dollar terms. It's what buyers and sellers exchanging one currency for another are willing to exchange them for.

But Bitcoin isn't the only cryptocurrency. There are others, and there's no limit to how many cryptocurrencies there could be, just like there are lots of different sovereign currencies.

And that's where the problem starts for the Fed - they're not making or controlling any of the new money or cryptocurrencies.

New Cryptocurrencies Are Coming - and the Fed Is Scared

However, some countries are looking at creating new cryptocurrencies on a blockchain.

China is considering it and may be the first sovereign nation to issue a new digital currency through a blockchain. The United Kingdom is considering it, as are the Netherlands and Barbados.

Now imagine if China, with the second-largest economy in the world, with the biggest population on the planet, became the first nation to issue a digital blockchain cryptocurrency that was 100% transparent, couldn't be counterfeited, didn't cost anything to "print," and would become increasingly impossible to hack the more it was used across millions and millions of computers.

It just might become the world's "reserve currency" preferred by everyone for transactions everywhere.

That got the Federal Reserve interested in blockchain and cryptocurrencies for sure.

In fact, the Fed's now trying to take a lead position as an advocate of blockchain.

The Chamber of Digital Commerce (a trade association representing blockchain) held a three-day confab at the Fed's Washington offices from June 1 to June 3 this year, entitled "Finance in Flux: The Technical Transformation of the Financial Sector."

The Federal Reserve co-hosted the event, which was closed to the public, along with the IMF and World Bank.

More than 90 central bankers attended the event where Fed Chair Janet Yellen pressed her counterparts to learn everything they could about financial innovations, specifically emphasizing decentralized ledgers, blockchain, and remarkably, Bitcoin.

What's really happening, in a "if you can't beat 'em, don't just join them, but lead them" approach, is the Fed knows if it doesn't get control over fast-moving fintech disruptors, it will itself become obsolete as fintech disruptors "disintermediate" banks... and eventually central banks.

Taking Cover from a Fintech Tsunami

Corporations are delving into blockchain to establish "smart contracts," while decentralized Bitcoin-like cryptocurrencies are coming to market with no connection to any bank or any central bank, or even any regulatory bodies.

New fintech disruptors, essentially bank disintermediators, are even being vetted by the OCC, the Office of the Comptroller of the Currency, which wants to expand its legal authority to offer "limited-purpose" charters to fintech lenders.

The OCC wants to be able to grant national charters to disruptors so they don't have to get state banking licenses in every state they want to do business in, which - because they're Internet-based lenders - means banking without borders.

What the Fed sees is a tsunami coming its way.

By embracing the future of blockchain and cryptocurrencies, the Fed ultimately wants to be the source of any global cryptocurrency it originates and manages as closely as it can, so it doesn't end up being a relic of the old world.

When the most powerful institution on the face of the earth is afraid of what it can't stop, you can be sure these fintech disruptors will be breaking old institutions and minting brand-new trillion-dollar opportunities.

So, stay tuned right here, because some new opportunities in fintech are just about to go public, and we're going all in on some of them to cash in on the future.

If You Think U.S. Stocks Are Safe from Brexit, Think Again... Markets across the globe tumbled after the United Kingdom voted to depart the European Union. Even in the United States, the Dow plunged more than 500 points intraday. And these companies in particular could put your portfolio at risk...

What one keeps is more important than what one makes.
When to stand a side and when to sell shines bright above what to buy !!

An other "Superpower" is the power to ANNIHILATE the
world's computer system.
That's what's coming in the 5th dimensional world and this will be the end of bitcoins…blockchain etc…etc…

At the end you have only gold….silver very coins….