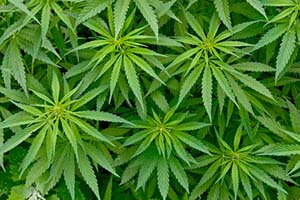 Many investors wouldn't even consider adding marijuana stocks to their portfolio. They think most pot companies are scams or that the companies aren't capable of turning a profit.

Regardless of your views on marijuana use, we are committed to helping you profit.
And simply put, pot stock investments are going to be a huge profit-generator.

Marijuana stocks are about to have a major breakthrough. In fact, there are seven reasons why the best "pot stocks" can deliver market-beating gains to investors over the next decade.

Best of all, most investors still haven't caught on to these reasons. That's why Money Morning is bringing them to your attention now, so you can be ahead of the curve – before the marijuana industry really takes off.

Reason No. 1 to Invest in Marijuana Stocks: Government Shift Toward Legalization

On Aug. 1, the U.S. Drug Enforcement Administration (DEA) could reclassify marijuana as a Schedule II drug, which would make it legal in all 50 states with a prescription, according to the Santa Monica Observer. A reporter from the newspaper questioned a DEA lawyer about the DEA's alleged plans to legalize marijuana. On the condition of anonymity, the DEA lawyer confirmed the allegations.

If this turns out to be true, Schedule II marijuana could be a huge catalyst for marijuana stocks.

Even if the change doesn't take place, marijuana use is still becoming more and more acceptable in the United States every year.

In fact, the rate of states legalizing marijuana has been soaring since 2000. Before 2000, only three states – California, Oregon, and Maine – had fully legalized medical cannabis.

But within the past six years, 15 states have legalized medical marijuana. That brings the total number of states where marijuana use is legal in some form to 25, including the District of Columbia.

In this year alone, two states – Pennsylvania and Ohio – have joined that growing list.

There's a big vote coming up in November that could legalize some use of marijuana in more than 20 states. According to Ballotpedia, activists are submitting ballot measures for a public vote on marijuana legalization in each of these states:

Reason No. 2 to Invest in Marijuana Stocks: Governments Will Say Yes to More Revenue

If there's anything governments love, it's more tax revenue. And that's what legal marijuana sales give them.
Just look at what happened in Washington and Colorado in 2014. Each state has legalized recreational marijuana use and collected around $70 million in tax revenue from marijuana sales, Time Magazine and CNN reported. That's about twice as much revenue as Colorado generated from alcohol taxes, according to analysts from the ArcView Group, a marijuana research firm. In 2015-2016, Colorado is expected to bring in $135 million in cannabis taxes. 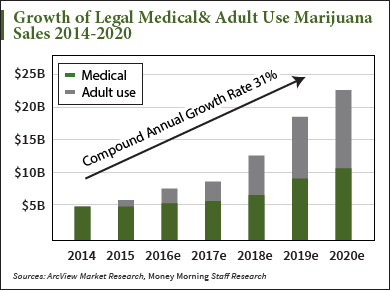 The U.S. marijuana market could be worth $30 billion annually by 2020, according to a 2015 report from the Bank of America Merrill Lynch, the first of such from any major financial institution. That's three times the yearly revenue of the National Football League, at $10 billion, The Washington Post reported.

Reason No. 3 to Invest in Marijuana Stocks: It's the Fastest-Growing Industry

The pot industry is growing rapidly. Analysts from the ArcView Group found that the marijuana industry grew 24% in 2015 to $5.7 billion. That makes legal marijuana one of the fastest-growing industries in the United States, according to ArcView. And in 2014, it was the fastest, according to the Bank of America Merrill Lynch report.

This year, the size of the legal marijuana market in the United States is expected to grow by $7.1 billion, according to ArcView. That represents 26% growth from 2015.

Reason No. 4 to Invest in Marijuana Stocks: Widespread Medical Use

There is a ton of research going into the medical applications of cannabis other than its traditional use as a painkiller.

Early research suggests cannabis can treat a large range of diseases and illnesses, such as schizophrenia, Type 2 diabetes, post-traumatic stress disorder, and even some types of cancer. Many existing cannabis-derived drugs on the market are already approved in countries such as the UK, Germany, and Spain. As more research is done in the United States, new cannabis drugs could even become approved by the U.S. Food and Drug Administration, according to the Bank of America report.

Currently, 25 states and the District of Colombia allow the use of marijuana for medical reasons. So far, though, not much FDA peer-reviewed research has been done on the medical applications of marijuana. One nonprofit, however, called the Multidisciplinary Association for Psychedelic Studies is trying to get marijuana approved by the FDA for the treatment of post-traumatic stress disorder.

A 2010 poll from ABC News showed that 81% of Americans believed that medical marijuana should be completely legal in the United States.

Reason No. 5 to Invest in Marijuana Stocks: The Growth in Investment Options

There are over 80 marijuana stocks that either trade over-the-counter or on the Nasdaq. So there are plenty of stocks out there to choose from. And as the marijuana industry grows, expect many more marijuana companies to go public.

Currently, the majority of these stocks are penny stocks, which trade for under $5.

Reason No. 6 to Invest in Marijuana Stocks: Banks Will Service the Business

On June 16, the U.S. Senate Appropriations Committee approved an addition to the Financial Services and General Government Appropriations bill that makes it easier for banks to provide services for legal marijuana businesses.

Currently, marijuana companies can only operate in cash, because most banks were afraid of doing business with them. But with the new measure, financial institutions would no longer fear opening up accounts for state-legal businesses.

For the bill to become law, it will need to be passed by the entire Senate and the House of Representatives. Then it would need the approval of the president.

Reason No. 7 to Invest in Marijuana Stocks: The Rise of Subsectors

Many people think that the marijuana industry is solely businesses that sell pot. But that's far from true. Some grow marijuana, while others make apps for pot sellers and users. Some even sell tools and equipment to help people grow and cultivate marijuana.

One of the sectors that will benefit most if marijuana is legalized federally is the biotech space, according to U.S. News & World Report. Current laws make marijuana research difficult, but legalization would allow biotech companies to research marijuana without fear of legal repercussions. Other areas that would benefit are the health and wellness, real estate, and software industries, according to the U.S. News & World Report.

The marijuana industry's wide breadth gives investors a lot options about where to put their money. And because it dips in all sorts of sectors, from tech to agriculture, the pot industry has plenty of room for future growth.

EDITOR’S NOTE: On Nov. 8, as many as 20 states will vote to legalize marijuana. The vote is expected to create one of the biggest wealth grabs in history, transforming everyday Americans into millionaires overnight. As a service to Money Morning readers, we’re now making available a 90-page cannabis investing guide called The Roadmap to Marijuana Millions. This “bible of weed investing” reveals the world’s top marijuana stocks every serious investor should consider right now. Normally valued at $499, it can be yours absolutely free. To learn how to get your free copy, click here. This offer is only available to the first 500 people who respond today. So please go here now to reserve your copy.

You didn't even mention the blossoming Canadian marijuana production industry. Canopy Growth Corp, Aphria Inc, Aurora Cannabis, Mettrum Health, and Organigram Inc are already shipping huge amounts of Marijuana around the country. Medical marijuana is already legal in Canada, and will be legalized recreationally sometime late 2017/early 2018. All of the companies I listed are publicly traded and growing revenue at at average rate of 30-50% per QUARTER.

Canopy Growth Corp is the world leader in marijuana production. They are making a large commitment to the international marketplace. They already have partnerships in Australia, Brazil, and soon Germany. They will be entering the US when medical marijuana becomes federally legalized. And by that time, they will have had a huge head start. I highly recommend you check these companies out.

The election is over and marijuana won out in almost every state that it was on the ballot for. So why are these stocks going down? I am really surprised and not sure what to think.

I'm about to take the leap into investing in the pot market. However, being in Canada doesn't seem to be an advantage. In other words, do you have any recommendations for a trusted broker. I've been told that, if you're investing in penny stocks, your "type" of account should be "Bye/Sell". Other than watching the stock from day to day, is there any way you can set up a notification (email or IM or email) so that the expert brokers can recommend a certain action (buy or sell). Any other additional info would be appreciated. Thanks in advance!!

Very good read. I am definitely looking into investing for marijuana.

I strongly recommend not to invest in marijuana, because of it's past history. It remains " fools gold ", and is really a volatile investment. One change from legalization to recriminilization by a change of government policies, and you're in for a loss of capital you really don't want. In 1969, Health Canada produce a report on marijuana use that stated a true portrait of its negative downfalls. American and Canadian lung cancer association will eventually start attacking the use based on the content of marijuana smoke, lawsuits will surely follow involving underaged kids usage, etc… It may sound stupid to some, but I'll stay realistic on this issue : It's a risky investment with very slippery grounds…

Would like to get more information on investing in Marijuana stocks and how to get started?

hey… when you find out … can you provide me with some of it to … im very interested … no matter if it goes up or down … i plan on investing in it.

What every happened to providing the name of companies to invest in . The write ups are good, but are of little or no use with out a companies name or accronime.

I want to invest but can not find where to one line. I had a friend years ago that did on line penny stock investing so i know it can be done.

COME ON PEOPLE! They give you a link to get pot 30 stocks! Click it!
SPECIAL: Millions could make a fortune on these 30 pot stocks come Nov. 8.

Looking forward to it.

Hi there, maybe you can help me.. I have worked for 6 or more years developing a stain of cannabis that doesn't get you high as we know cannabis to do but rather takes pain and discomfort away when smoked or ingested.
How would I go about getting my product out there for sale?

Hey Valerie, I can help you. Write me or give me an email. aaron@kinetictruth.com

I own several marijuana/cannabis stocks (i.e., Ticker Symbols: CGRW; MOS; AMMJ; CBIS; XXII; and CBDS). All these stocks are substantially down. Do you recommend Selling or Holding or Add to Position? Please advise? Thanks, David

looking over your web site, I am impressed with it. I am looking for reputable companies for information and investments

i think investing in marijuana is way less of a risk than any stock investment ive ever heard of… Reason being, is all the buzzz…. recent legality in many states and studdies have shown for years its safer than MORPHIENE, Think about that just for a second…. No Really think about the plant that derives from,and tell me that its not a plant thats dangerous