U.S. stocks have gotten crushed since the Brexit vote. In fact, the Dow has fallen roughly 900 points over the last two days after the UK voted to leave the European Union.

The selling has impacted all sectors, but there is a select groups of U.S. stocks that are facing major risks following the Brexit. That's why we've listed the seven U.S. stocks to avoid today…

But before we get into the list, here's why the Brexit vote is weighing so heavily on U.S. stocks now… 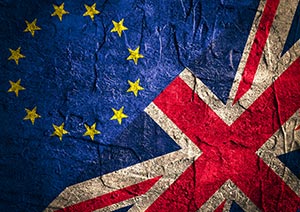 Brexit has sent global and currency markets into a tailspin. Britain's exit from the EU calls into question the resilience of the Eurozone and the euro.

The pound fell to its lowest level against the dollar since 1985 intraday Friday. The pound fell again Monday, hitting a 31-year low of $1.3221 versus the greenback.

And the dismal performance for stocks continued Monday…

In the UK, the FTSE 250 Index fell another 4.9%. The 10-year UK government bond yield fell below 1% for the first time on record, according to data from Tradeweb.

While the selling has been broad-based, stocks with heavy exposure to the Eurozone stand to be hardest hit over the long term.

Money Morning Capital Wave Strategist Shah Gilani recently detailed seven U.S. stocks with huge exposure to the UK and Europe that could be greatly impacted by the Brexit results…

Analysts from Goldman Sachs warned the UK will slip into a recession next year in the wake of Brexit.

The International Monetary Fund (IMF) said the long-term costs to the UK economy will be substantial. The IMF said leaving the EU will hit British living standards, raise inflation, and cut up to 5.5% of the country's GDP.

U.S. companies do a sustainable amount of business in Britain. Roughly 10% of sales at U.S. multinationals' overseas operations are booked in the UK, according to the Commerce Department.

The list of U.S. companies that generate billions of dollars each in the UK and across the EU includes more than half of all the S&P 500 companies.

"The Brexit will be devastating for these companies' revenue and profits, but because so many of them are such a big part of America's big stock market benchmark indexes, U.S. markets are likely to head a lot further down the tubes alongside UK and European equities markets," Gilani says.

JPMorgan Chase & Co. (NYSE: JPM) employs 16,000 people in the UK and generates substantial revenue from banking services and deal-making in the UK and across the EU. CEO Jamie Dimon said the Brexit will result in layoffs. The bank is already in the process of relocating operations. Shares of the United States' biggest bank by assets fell 4.45% Friday and were off another 4% mid-day Monday.

Ford Motor Co. (NYSE: F) employs 14,000 people in Britain and gets 18% of its revenue from the UK. It is the number one auto brand in the country. Britain led the recovery in car sales after the 2008 financial crisis. Low interest rates and a strong pound allowed automakers and finance companies to offer customers cheap deals. Some 2.6 million new vehicles were sold in Britain last year, which some analysts think is about 300,000 units more than might be expected in a "normal" year. But the Brexit could pop that car bubble. Ford shares lost 0.88% Friday and were down 3.91% mid-Monday.