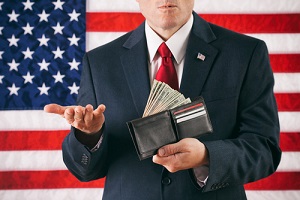 As we near the 2016 presidential election, more and more corporations are loosening up their purse strings to donate to the Republicans or Democrats.

The majority of these donations will go to the super PACs supporting individual candidates, but not all. Some of the donations will be "hard money" - that is, cash given directly to candidates' campaigns, regular PACs, or political parties, according to the Center for Responsive Politics.

Hard money donations are different from super PAC donations, which have an uncapped donation limit. The hard money cap varies depending on what donation method is used.

Most hard money donations are used for candidates' salaries, travel, phone bills, rent, or TV ads, according to the CRP. Hard money is also able to be used more effectively by the candidates, who can choose what it goes toward, unlike super PAC donations.

Many hard money givers also have a long history of lobbying Washington, like our top five hard money corporate donors. These companies usually give through their PACs rather than donating through individual employees, according the CRP. The PACs contribute to their corporations' favorite political candidates, often giving them the maximum amount of $5,000 per candidate per election, the CRP reports.

In this election cycle, Hillary Clinton has received more than $300,000 from corporations, while Donald Trump has received mere hundreds, according to the CRP. But Republicans in general received more hard money donations than Democrats.

Let's take a look at the top five of these hard money corporate donors now...

Top Corporate Donor No. 5, Goldman Sachs Group Inc. (NYSE: GS) - $3.2 million: Clinton has directly received $149,000 from Goldman, while Trump has been given only $751, according to the CRP. In past election cycles, most of Goldman's hard money donations have gone to Republicans.

Top Corporate Donor No. 3, Comcast Corp. (Nasdaq: CMCSA) - $3.62 million: Like AT&T and Honeywell, Comcast's donations also skew to the right, but only slightly. It has given 53% of its $3.6 million to the GOP. Most of that money was given by a super PAC, according to the CRP. Comcast has given more than $100,000 to Clinton, the CRP reports.

Top Corporate Donor No. 2, AT&T Inc. (NYSE: T) - $3.63 million: AT&T's donation patterns are similar to Honeywell's. It also leans to the right, with 61% of its $3.6 million given in hard money going to the Republican Party. The company's super PAC is also responsible for most of the donations, according to the CRP.

As one might expect, the company most advocates for issues in the defense and energy sector. And it typically gives to both Democratic and Republican parties, although it usually gives most to Republicans. Of its $4.4 million given in hard money, only 33% has gone to Democrats, while 67% has gone to Republicans. The majority of this money has been donated by Honeywell's super PAC.

The Unbridled Reign of Super PACs: In a post-Citizens United world, super PACs have been granted unprecedented fundraising power. Now they're threatening to affect your vote in 2016...